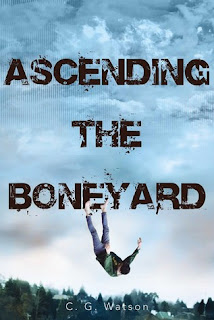 From Goodreads:
Donnie Darko meets The Matrix in this mind-bending and captivating mystery about one teen’' surreal experiences after surviving a major trauma.

Sometimes life gets too real, and Caleb Tosh has taken one hit too many. First, there was the accident that changed everything for Tosh's younger brother. Now his mom has left. All the pain, the grief and loss, have finally pushed Tosh over the edge.

If only he could have a do-over. Wipe his reality. Start fresh. Maybe he could fix all of his mistakes and everything would be different. Tosh immerses himself in the complex missions from the game he obsessively plays, The Boneyard. The game bleeds into the dark nature of his everyday life, folding reality into surreality until it's impossible to separate one from the other. Tosh is desperate to Ascend, to reach the next level, to become Worthy.

Readers are brought on a one-of-a-kind, absorbing journey where no one can say what is real and what isn't—right up until the shocking, yet deeply powerful conclusion.

My Review:
It was just so awesome to read this book! It was strange, and I didn't know what was going on half the time, but I just had to keep reading! It was confusing, and wonderful, and it didn't make sense, and yet it was happening!

Caleb hasn't had it easy. When he was 12, there was an incident, and ever since, his brother has been in a wheelchair. Now his mom is gone. And as a way to escape, he plays a computer game. And gets it into his head that the game is manifesting itself in real life. Or maybe not, that the game changed that it was his life he was playing. Not sure on that point, the beginning had it easy to differentiate between the game and real life, but the rest of the book, not so much, he could've been doing things in real life, or he could've been playing the game. It was confusing!

We knew that there was something going on. It's not like a game can just go from being on your computer to being in real life. And if a friend didn't enter the car, then he can't be talking to you, so you're making up his side of the conversation.

The whole thing about the game, Ascending, becoming Worthy, it's not the best message to be sending to kids. Because to fail is to be unworthy, and everybody fails. And repeated failure, especially what happens in a game, just isn't good!

Loved this book, so enjoyable, and with that ending, just makes me wonder what exactly happened, what was going on when Caleb saw one thing-what did everybody else see?