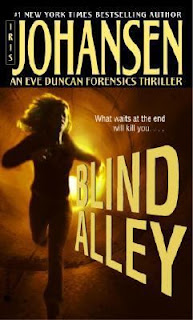 From Goodreads:
ONE OBSESSED KILLER ...
ONE DEADLY TRAP ...
ONE WOMAN'S DARKEST NIGHTMARE ...

Her job is to put a face on the victims of violent crimes. But as forensic sculptor Eve Duncan works on the skull of a newly discovered victim, she's about to get the shock of her life. The murdered Jane Doe's face has been erased beyond recognition. But whoever killed her wasn't trying to hide her identity. The plan is far more horrifying. For as Eve's skilled hands reveal the murdered girl's face, she recognizes someone she knows all too well. Someone who isn't dead. Yet.

To stop this twisted psychopath, Eve must put her own life in the balance. But that's not the worst of it --- when her adopted daughter Jane reveals a bizarre connection to the case, Eve can't stop her from joining the hunt for the killer. A hunt that will lead to a terrifying confrontation ...

My Review:
Yeah, it was so great to reread this book! It's been so while (and I've been meaning to read this book ever since I finished the last one!) I loved the mystery, the thriller, and just being able to be with these characters again!

It was bittersweet to have Jane and Trevor's first meeting together. Because of what happens in Silencing Eve, knowing that's going to happen, well, yeah. Going back to the beginning with this knowledge just makes it mean that much more!

The bad guy was just plain nuts. To blame the problems in your life on a lady that's been dead 1,000 years, it doesn't make sense. Blame your dad for his obsession. They didn't have plastic surgery back then (or really anything of that nature to alter their looks permanently, I believe) so it was just genetics that she looked that way. Of course he had a lot of other problems!

I don't remember if we get to learn who the skull that they pretended was Cira's was, looked like. I think it's going to be important, and I really want to know who, because of Eve's reaction looking at it! I want to know!

Such a fantastic book, and I can't wait to keep rereading this series!