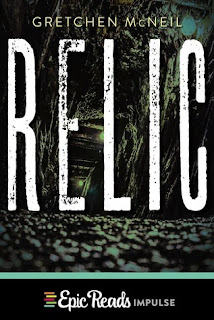 From Goodreads:
From Gretchen McNeil, the author of Ten and Possess, comes this teen horror novel perfect for young fans of Stephen King, and Lois Duncan's I Know What You Did Last Summer.

For Annie Kramer, the summer before college is bittersweet—both a last hurrah of freedom and the last days she'll spend with her boyfriend, Jack, before they head off to different colleges. So she and her friends plan one final adventure: a houseboating trip on Shasta Lake, complete with booze, romance . . . and an off-limits exploration of the notorious Bull Valley Mine.

The legends of mysterious lights and missing persons on Shasta Lake have been a staple of sleepovers and campouts since Annie was a kid. Full of decrepit bridges that lead to nowhere, railroad tunnels that disappear into the mountains, and terrifying stories of unexplained deaths and bodies that were never recovered, Bull Valley Mine is notorious and frightening—perfect for an epic conclusion to their high school lives.

The trip is fun and light—at first. But when a deranged stranger stumbles upon their campsite, spouting terrifying warnings and pleas for help, it's clear that everyone is in danger. And when their exploration of the mine goes horribly wrong, Annie and her friends quickly discover that the menace of Bull Valley Mine doesn't stay at Shasta Lake—it follows them home.

As one by one her friends fall victim to this mysterious and violent force, Annie must do whatever it takes to discover the ancient secrets of the mine and save her friends . . . if she's not already too late.

My Review:
Yes, I loved this book! It was so awesome, and creepy and dark and just wonderful! I enjoyed reading about Annie, Jack, and their friends as these murders keep happening, and the creepiness factor increased by about 100%!

I loved this story! It went from a nice spring break light mystery, to a pretty dark murder mystery with cannibalism. We had these 8 friends, and they were slowly picked off one by one, and the tension grew, the question being, who was the killer?

There were a lot options! Obviously all of the first seven of the kids-the eight minus Greer, the first of the eight to be a victim. That meant that Annie was also a suspect. But then there were others. Like Annie's dad. And the suspect list just kept changing with each death!

That ending, oh, wow! I wasn't expecting that, but I think I should have. I mean, I've read Gretchen McNeil's previous books! It made sense, the clues were barely there-the missing time, the bloody clothing, the two used up bullets. Yeah.

Such a great book, and so creepy, and that it might be the end-maybe. If there was more to happen afterwards, I would hope that we'd get a sequel!