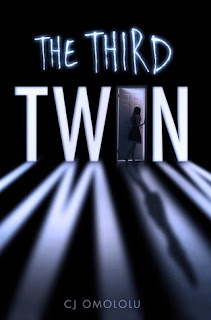 When they were little, Lexi and her identical twin, Ava, made up a third sister, Alicia. If something broke? Alicia did it. Cookies got eaten? Alicia's guilty. Alicia was always to blame for everything. The game is all grown up now that the girls are seniors. They use Alicia as their cover to go out with boys who are hot but not exactly dating material. Boys they'd never, ever be with in real life.

Now one of the guys Alicia went out with has turned up dead, and Lexi wants to stop the game for good. As coincidences start piling up, Ava insists that if they follow the rules for being Alicia, everything will be fine. But when another boy is killed, the DNA evidence and surveillance photos point to only one suspect: Alicia. The girl who doesn't exist. As she runs from the cops, Lexi has to find the truth before another boy is murdered. Because either Ava is a killer…or Alicia is real.

My Review:
Oh, wow, I loved this book! It was so fantastic, and yeah, so interesting to read! That CJ Omololu died, well, it's sad and it's horrible. The world lost an amazing author, so I hope that her works will show their awesomeness!

Boys can be pretty horrible. But that doesn't mean that they deserve to be murdered. And that it looks like either Lexi or Ava killed them, it sucks. Or does Alicia exist? It was such a compelling mystery, and one so enjoyable to read!

I really enjoyed these characters, Lexi the one who is more the studious, quite type, Ava more of the party girl, and when they were Alicia, they were able to be different. Lexi, who deals with not making it into the same school as her adoptive father. Ava, who we don't get to know very well, but has her
own problems!

Loved how things worked out! That there was more to meet the eye, yeah, that was so fantastic! Loved that twist in how many siblings there were, and how some people were connected! So awesome and amazing to read!

Loved this book so much, it was just so great!