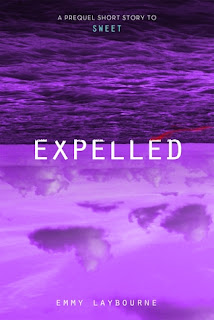 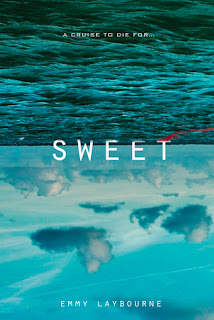 From Goodreads:
"She has lost sixty pounds in just over six weeks! With no side effects."
Li Jing knows that her research, the weight-loss compound she's developed, will change millions and millions of lives. Any risk is worth it to succeed.

Unfortunately, the school board doesn't agree, and Li Jing has been expelled with a permanent black mark on her record that will keep her from ever getting a PhD... Apparently conducting unauthorized trials on human subjects is frowned upon-no matter how willing the subject was or how well the compound worked.

Author Emmy Laybourne shares the chilling story behind the miracle weight-loss drug, SOLU, in this prequel story to her new novel SWEET.

From Goodreads:
People would kill to be thin.

Solu's luxurious celebrity-filled "Cruise to Lose" is billed as "the biggest cruise since the Titanic," and if the new diet sweetener works as promised—dropping five percent of a person’s body weight in just days—it really could be the answer to the world's obesity problem. But Laurel is starting to regret accepting her friend Viv's invitation. She's already completely embarrassed herself in front of celebrity host, Tom Forelli (otherwise known as the hottest guy ever!) and she's too seasick to even try the sweetener. And that's before Viv and all the other passengers start acting really strange.

But will they die for it, too?

Tom Forelli knows that he should be grateful for this job and the opportunity to shed his childhood "Baby Tom-Tom" image. His publicists have even set up a 'romance' with a sexy reality star. But as things on the ship start to get a bit wild, he finds himself drawn to a different girl. And when his celebrity hosting gig turns into an expose on the shocking side effects of Solu, it's Laurel that he's determined to save.

My Review:
I'm really glad that I read these books on Halloween! Because it just added an extra layer of creepiness to this book that already had a ton of it, and yeah, they were just so fantastic to be able to read! So awesome!

Expelled was pretty creepy all by itself (I did read it second) and how Lin Jing was expelled from school because she'd been doing human trials. And how that led to the events of Sweet, yeah, so creepy!

I loved the romance in Sweet! Because it was awkward, and that was just so cute! That they both didn't take Solu (good thing!) and that he had his job and she didn't have the right image for it, but they worked out their differences!

And then there was the horror. That was pretty creepy, what Solu slowly did people who took it. And then what people did to others who had taken it, to the point of killing. That was pretty horrible, and then the reason why it all happened? Worse. Then there was that ending, that it was going out to the world, with the world not knowing what was going to happen! I would love a sequel!

So fantastic, and I enjoyed reading them so much!