Week 48 Review: The Jock and the Fat Chick 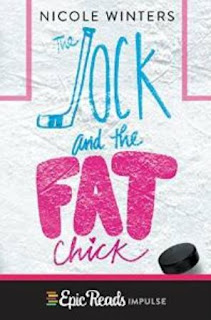 From Goodreads:
No one ever said high school was easy. In this hilarious and heartwarming debut, one high school senior has to ask himself how much he's willing to give up in order to fit in.

Kevin seems to have it all: he's popular, good looking, and on his way to scoring a college hockey scholarship. However, he's keeping two big secrets. The first is that he failed an assignment and is now forced to take the most embarrassing course ever--domestic tech. The second is that he is falling for his domestic tech classmate, Claire.

As far as Kevin is concerned, Claire does have it all: she's funny, smart, beautiful, and confident. But she's off-limits. Because Kevin knows what happens when someone in his group dares to date a girl who isn't a cheerleader, and there's no way he is going to put himself—or Claire—through that.

But steering clear of the girl of his dreams is a lot harder than Kevin thought…especially when a cooking project they are paired together for provides the perfect opportunity for things to heat up between them outside the classroom….

My Review:
This book was really fantastic! It was very quick, but had a great story in those pages! I enjoyed reading about Kevin the jock who doesn't like the typical beauty, and Claire, the fat chick who loved food preparation!

This book was solely from Kevin's POV, which isn't something that happens all that often, so that was a bonus! And Kevin wasn't a typical jock, he didn't like the cheerleader type, he liked curvy ladies, ladies that his team mates would call "fat."

I really enjoyed him and Claire together, thrown together because of his attitude towards food, and what he as an athlete should be eating. They worked really well together, his lack of knowledge in cooking, and her with both parents in some aspect, her dad a chef and her mom a baker! Just great!

Well it did suck all with all the expectations of their relationship and each other, as well as bad timing, they did work things out rather well, and they have a future, which is really great! Totally enjoyable and great!

This was a really awesome story about people in love, people who might not be society's standard, but are happy together, and that was just awesome! I wish more guys felt like Kevin!