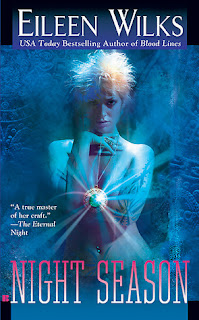 From Goodreads:
Pregnancy has turned FBI Agent Cynna Weaver's whole life upside down. Lupus sorcerer Cullen Seabourne is thrilled to be a father, but what does Cynna know about kids? Her mother was a drunk and her father abandoned his family. Or so she's always believed...

As Cynna is trying to wrap her head around this problem, a new one pops up in the form of a delegation from another realm. They want to take Cynna and Cullen back with them- to meet her long-lost father and find a mysterious medallion. But when these two born cynics land in a world where magic is common-place and night never ends, their only way home lies in tracking down the missing medallion- one also sought by powerful beings who will do anything to claim it.

My Review:
Yes, it was so great to read this book! I'd been putting off reading it because I hadn't read the novella in the anthology On the Prowl, which is explained in the anthology's review. So I was waiting a long time for this book. But it was totally worth it!

Loved reading this book, because we had Cynna and Cullen in a different world, while she's pregnant, and they're on this world where humans are in the minority because they're neutered. And her dad is one of those humans. Which was a really complicated situation!

This book also had the characters from the novella, which is part of the reason to read things in order, because if that novella hadn't happened, then things in this book wouldn't have worked out too well, so yeah, glad that things worked out, and I can't wait to read more about them!

I enjoyed the ending, with Gan being the one to be in charge of the amulet, because that just works thing out very well. And that finding out that her boss was allergic to metals, including what's in his wheelchair, well, now he's going to live, and that's great!

Really enjoyable book, loved reading it, and I need to read more of this series!