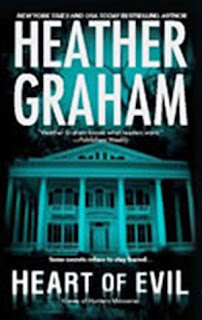 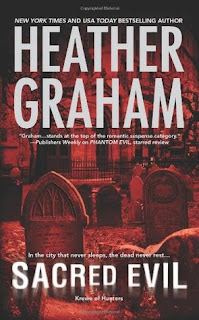 From Goodreads:
Emerging from the bayou like an apparition, Donegal Plantation is known for its unsurpassed dining, captivating atmosphere, haunting legends and now a corpse swinging from the marble angel that marks its cemetery's most majestic vault. A corpse discovered in nearly the same situation as that of Marshall Donegal, the patriarch killed in a skirmish just before the Civil War.

Desperate for help traditional criminologists could never provide, plantation heiress Ashley Donegal turns to an elite team of paranormal investigators who blend hard forensics with rare & often inexplicable intuition. Among the Krewe of Hunters is an old flame, Jake Mallory, a gifted musician with talent stretching far beyond the realm of the physical, and a few dark ghosts of his own.

The evil the team unveils has the power to shake the plantation to its very core. Jake and Ashley are forced to risk everything to unravel secrets that will not stay buried even in death.

From Goodreads:
A terror born of Jack the Ripper

The details of the crime scene are no coincidence. The body of a promising starlet has been battered, bloodied and then discarded between two of Manhattan's oldest graveyards.

One look and Detective Jude Crosby recognizes the tableau:

A recreation of Jack the Ripper's gruesome work. But he also sees something beyond the actions of a mere copycat. Something more dangerous and unexplainable.

As the city seethes with suspicion, Jude calls on Whitney Tremont, a member of the country's preeminent paranormal investigating team, to put the speculation to rest. Yet when Whitney and Jude delve deeper, what they discover is more shocking than either could have predicted, and twice as sinister.

My Review:
Yes, these books were so fantastic! I'm really enjoying reading this spin off series (at least the ones that I had read previously) with these characters and story lines! Really fantastic and enjoyable, and still fresh, even when there's over 10 books in the combined series!

These characters are really awesome, from Ashley, the heir of the Donegal Plantation, Jake, member of the pretty newly formed Krewe of Hunters, and Whitney, and Jude, a New York detective! They're different people, and I loved watching them interact!

The mysteries! Awesome and diverse, though there are some cliches, well, they're cliches for a reason. And the various locations help make things all the more vivid, with all the cities and landmarks and off the beaten track places! Awesome!

I enjoyed how things concluded, the bad guy in Heart of Evil, it was hard to suspect him from what he presented, but the good guys caught him, so that was great! And loved the ending for Sacred Evil, that was so great!

I enjoyed reading these books so much, and I can't wait to read more of this series!