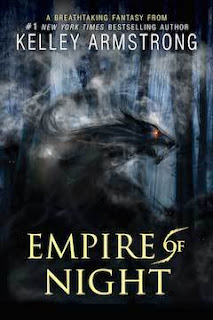 From Goodreads:
Sisters Moria and Ashyn are the Keeper and Seeker of Edgewood. Or at least, they were.

Their village is gone. Their friends have betrayed them. And now, the emperor has sent them on a mission to rescue the children of Edgewood—accompanied by Prince Tyrus and a small band of imperial warriors. But the journey proves more perilous than they could have imagined. With treachery and unrest mounting in the empire, Moria and Ashyn will have to draw on all their influence and power to overcome deadly enemies—not all of them human—and even avert an all-out war.

My Review:
This was really fantastic to read! I enjoyed it so much, I loved reading about Moria and Ashyn's adventures, because oh, boy, were they entertaining to read about! Plus, their voices, and the switching back and forth between them, ramping the the conflict, so great!

This is the book were we really get to know Tyrus, because he was only introduced at the end of Sea of Shadows. And he was a really interesting character to know, the bastard son of the emperor, and friends with Gavril. So there was that to complicate things!

I really wanted to punch Simeon. He was a liar, a coward, and his introduction, of thinking Ashyn was a servant, and then thinking she was lying about being a Seeker, and how Moria had to set him straight, well, the mention that he'd be disappeared, well, that was really great!

There were a lot of things going on in this book, like the creatures on the cover of this book! They were in till near the very end, but they were a pretty big threat! Though Moria, and probably Ashyn, can banish them!

And then that ending! With the emperor wanting Moria to go back to the bad guy's camp-that Gavril is working with him, apparently, I want to know more about that! And Ashyn, being with people who claim to be her family, her mother's father! I want to know more there! Plus, the dragon skeleton! More!

Favourite lines: "Apparently, withdrawing into silence did not prevent on from eavesdropping." Apparently not! "She promised they meant it no harm and apologize for what had happened. Neither assurance was particularly convincing-not when two very large beasts bit at the mummy and one very angry Keeper shouted at it." Yeah, that would be a bit hard to believe! "She'd like to think her words loosened its resole and calmed its fevered panic. But she acknowledged that Moria-snarling for it to be gone and pummelling it with spiritual energy-probably played a greater role in its eventual decision to depart." Yeah, probably! "You didn't shriek. Still, it is a shame Simeon wasn't here to record the encounter for posterity. Prince Tyrus, attacked by a mummified monk. Truly, though, it looked like a monkey. A crazed monkey, clinging to you-" Yeah, that's pretty funny! "The mummy twitched. This time, both Ronan and Tyrus leaped on it, blades slashing. Ronan severed an arm. Tyrus cleaved the corpse clean in half, the legs falling free. Yet the thing was already in flight, hurtling itself at Moria...who skewered it on the end of her outtrust dagger. She held it there, casually, as the mummy gnashed its teeth and clawed with it's remaining arm. 'Need some help with that?' Tyrus asked. 'No, it's remarkable light. that must be a result of the drying process.' 'And the fact that it's missing three limbs.' 'True.'" Poor corpse! "You could rest. I'll not start the battle without telling you. I'd never hear the end of it if I tried." Nope, you wouldn't! "I'm fine. I just need...I need my trousers apparently. We'll put that at the top of the list." Well, it's not your fault you didn't know, you were poisoned! "Which was, of course, ridiculous. What was the point in ambushing someone if you were going to let him draw his sword?" Agreed, pointless, silly honourable Tyrus! "That's a truly lovely dress, Lord Gavril, and while I cannot say that I appreciate gowns as much as I ought, I do appreciate the gesture. However, I'm not sure it goes with my cell. Perhaps something in a shade of blue." I love that sarcasm!

Such a fantastic book! And now I just really want the 3rd and final book now!