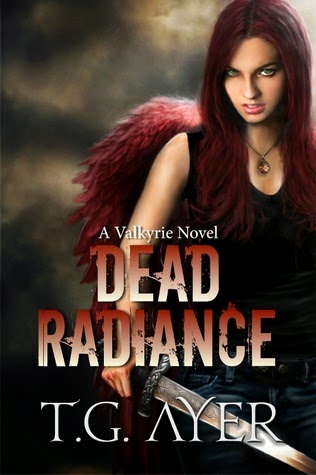 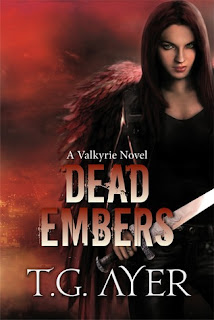 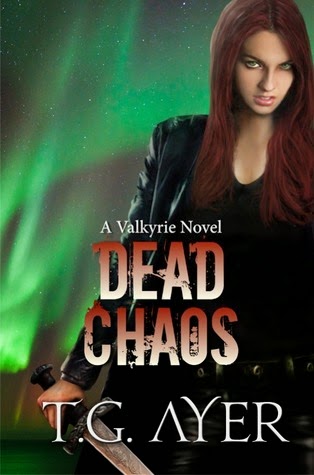 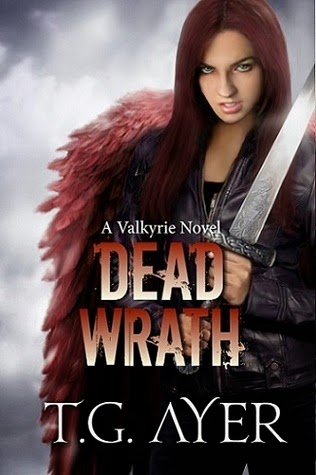 From Goodreads:
That day I knew for sure. I'd lost control of my tears then. They fell in huge, mocking drops. I stared at Joshua through those bitter tears, my heart missing beats as I tried to remember to breathe.

I finally knew what the glow meant.

I was a freak and Joshua was going to die.

Bryn Halbrook had always seen the glow. But it is only when her best friend dies that she discovers the meaning of those beautiful golden auras — Death. Alone, lost in the foster system, she struggles to understand who she is and why she was cursed with the ability to see the soon-to-be-dead.

The new foster kid, Aidan, isn't helping any. Mr. Perfect seems to fit in no matter what, making her feel even more pathetic. But when his affections turn to her, Bryn finds him hard to resist. Impossible actually. A mystery himself, Aidan disappears, leaving behind a broken heart and a mysterious book that suggests Bryn might not be entirely human.

Bryn stands at the threshold of a journey of discovery. Will destiny help her find herself, find her purpose and her place in a world in which she’d never belonged?

From Goodreads:
Valkyrie-in-training Bryn Halbrook just can't catch a break. With her boyfriend stuck in Hel and the taunting laughter of Loki still ringing in her ears, she struggles to concentrate on her training and duties in Odin's realm. The last thing she expects or wants is more adventure—but then treachery, a shocking abduction and a chilling discovery send her forth on another perilous, globe-hopping mission.

As the ultimate battle, Ragnarok, draws closer, it's a race against time for Bryn, Fenrir and their team to discover who kidnapped her foster brother from the halls of Asgard and what's causing the mysterious deaths of so many of Odin's chosen warriors.

In the exciting sequel to DEAD RADIANCE, Bryn encounters dwarfs and dragons, new friends and old foes—but worst enemy of all may be the person she trusts most!

From Goodreads:
Valkyrie Bryn Halbrook is broken and damaged…

Struggling to accept the loss of her wings, Bryn's not sure if she can be a real Valkyrie anymore. But when a mysterious prophecy claims she will be the reason the All-Father dies, she is determined to ensure the prediction will not come to pass.

A visit to the three fates who live beneath the great Tree of life, sends Bryn racing against time to find the missing Heimdall and his horn. As Odin's life hangs in the balance and Ragnarok draws ever closer, Bryn has to find a way to save Heimdall and Odin before she can discover the truth about who she really is.

In this thrilling instalment in the Valkyrie series Bryn must battle not only the formidable frost giants and the hated God Loki, but she must also find a balance between what she will lose and what she will gain.

My Review:
Ragnarok is upon the worlds, and the time to fight is now. They come from all of the Nine Realms. Dark Elves, Dragons, Frost Giants, Elves ... They all come to fight for Odin.

And they answer to Valkyrie Brynhildr.

While Bryn grieves, struggling to cope with Sigrun's death, she knows too there is no time for tears. Odin is still a shade of himself and though there is no sign of Loki in all of the Nine Realms - Thor knows he is hiding in Midgard. As the Warriors gather, Bryn must head the offensive and enter the Human Realm in search of the Trickster and his henchman.

The war is silent and it rages all across the planet.


In this, the 4th thrilling instalment in the Valkyrie series, Bryn takes the war to home turf. From New York to London, Interpol to CIA, Bryn and her team risk their lives to save their families, to the All-Father. And to prevent the end of the world.

My first review of Dead Radiance, Dead Embers, Dead Chaos
My Review:
I think that it was a great idea of mine to reread these books, all together! Because previously, I'd been reading them as I got a chance to, for review tours, as they were coming out. Well, now all 5 of them are out, so I just had to read them!

Going through this whole journey with Bryn, it was really fantastic, to be able to do that again! Her and Sigrun's friendship, and her feud with Astrid, and the friends that she'd lost in the beginning, only for them to now be Warriors of Odin!

Though reading this book, I realized, that hey, Bryn and Aidan's relationship, it wasn't built on much. I think of these four books, they had about 150 max. pages together. The rest of the time, they were either separated, or dealing with all the issues that were present, like Aidan being stabbed and poisoned by Loki. Though it was too bad that they didn't work out, well, then there was Joshua. Though that felt a bit weird to me, after books rooting for Bryn and Aidan! But then again, they couldn't really be together,, seeing as he's her great-nephew!

One thing that I hope gets answered, is is the spear, and how only the blood of Odin can touch it. Or else they turn to stone. That Loki touched it, and being her brother, Odin's son, and he turned to stone in the weird diversion from the Bifrost, is it going the Marvel movies way (my only knowledge of the Marvel world) where Loki is adopted? Or just how does that work?

Favourite lines from Dead Radiance: "Easy? You mean that horrifically painful, mind-blowingly agonizing experience I had in front of Odin and the gathered Valkyries could have been worse?" Just the idea of that is a bit scary! "Fenrir had this strange idea that my survival after touching Brunhilde's sword meant I now possessed all the knowledge, power and skill she'd had when she'd been alive. So the ferocity of his training session the next morning didn't surprise me." Which doesn't mean that it was easy to deal with said ferocity, seeing as he's wrong thus far! "It's no fun when I can't steal the necklace because it's lost. I want to give it back to her so I can see her face when I steal it from her again." Collecting and giving it back, so you can take bits of it again? Such very strange logic there, Loki!

Favourite lines from Dead Embers: "Thanks, Fen. Too bad you didn't throw me off a higher mountain." Yeah, then she might've had enough time to really start to fly, not crash! "Would you like to scream a little louder? I do not think the residents of the state of Hawaii heard you well enough." Excellent use of sarcasm! Good job, Fen! "I'd survived a battle with a fire giant. Death by fire giant would have been a worthy end to my life. I could handle that. I just couldn't handle knowing I was going to be road kill." Yeah, he's such a bad driver! "It hit me then. Fen had actually driven a vehicle all by himself to come get me. Good grief. It was a miracle I hadn't emerged from the Bifrost to find half the state troopers in California chasing him across the country, helicopters in pursuit." Yeah! Very big miracle! Very lucky! "'If we fall into the snow one more time I swear I will--' 'What? Will you tell your daddy I wasn't playing nice?'" Seeing as said daddy is Fen, general dude extraordinaire? Love this teasing! "Was the god Thor offering me a cuddle moment after telling me to kill some evil queen?" That would be very weird! "Great, we'd been afraid of a bunch of scary old torches." Not quite the secondary guards they were expecting! "It must have looked strange to the drunken dwarf. Beer flying through the air, landing on nothing, and sliding down nothing, then dripping onto the stone floor. From the edges of nothing." That's a lot of nothing! So funny! "Pia snuck behind him and repeated her previous technique, knocking him unconscious with the hilt of her short blade, a satisfied smirk on her face. When I stared at her, she shrugged, her cheeks tinged a light pink. My new Valkyrie friend was clearly enjoying this level of violence way too much." But it's knocking out the bad guys! So yeah for getting a bit of fun out if it! "Yeah, sure, I can barely walk, but no way do I want to be lifted in your arms like a child, wearing this short, open-backed hospital gown, my bare ass hanging out for the whole world to see. No frickin' way." Yeah, I think no one would want that!

Favourite lines from Dead Chaos: "Does she not remind you of a certain Valkyrie that told everyone she was not the legendary Brynhildr?" Oh yeah, Enya is pretty similar to Bryn! "Njall grasped Joshua's arm and shook it so hard I was sure a little more force would have him using Joshua as a hammer on one of his anvils." Poor Joshua! That must've been a pretty big force there!

Favourite lines from Dead Wrath: "Damn Asgard and all the people here who wanted to take care of me." This is funny, the sarcasm, that they check to make sure that she's eating! "Now do you want to explain how you got here before us or do we line up and shake it out of you?" That would be pretty interesting to see!

Yeah, it was utterly fantastic to read these books all together, and now I just really want to read Dead Silence!