Week 10 Reviews: Let the Dead Sleep, Waking the Dead, Infernal Night, The Dead Play On, Toys in the Attic, Blood on the Bayou 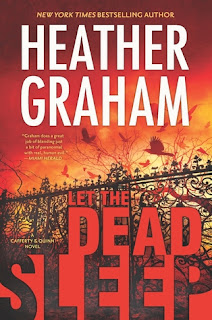 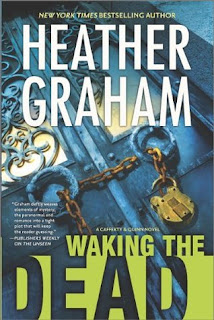 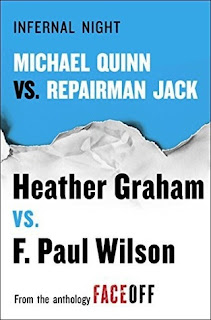 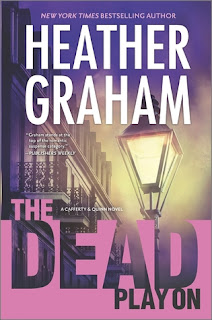 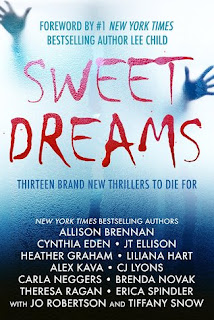 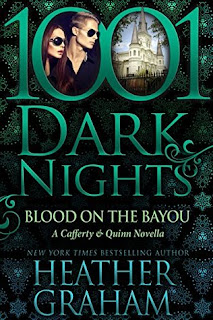 From Goodreads:
An Object of Desire? Or of Fear?

It was stolen from a New Orleans grave—the centuries-old bust of an evil man, a demonic man. It's an object desired by collectors and by those with wickedness in their hearts.

One day, its current owner shows up at Danni Cafferty's antiques shop on Royal Street, the shop she inherited from her father. But before Danni can buy the statue, it disappears and the owner is found dead….

Michael Quinn, former cop and now private investigator, is determined to find and destroy this object with its long history of evil and even longer trail of death. He and Danni are drawn together in their search for the missing statue, following it through sultry New Orleans nights to hidden places in the French Quarter and secret ceremonies on abandoned plantations.

But Cafferty and Quinn know that their story won't end when this case is closed and the dead rest in peace once again.

From Goodreads:
They say a painting can have a life of its own…

In the case of Ghosts in the Mind painted by Henry Sebastian Hubert, that's more than just an expression. The characters are reputed to come to life—and to kill. The artist was a friend of Lord Byron and Mary Shelley, joining them in Switzerland in 1816, and now, almost two hundred years later, the painting appears in New Orleans. Wherever it goes, death seems to follow.

Danielle Cafferty and Michael Quinn, occasional partners in solving crime, are drawn into the case. They begin to make connections between that summer in Switzerland and this spring in Louisiana. Danni, the owner of an eccentric antique shop, and Quinn, a private detective, have discovered that they have separate but complementary talents when it comes to investigating unusual situations.

Blending their personal relationship with the professional lives they've stumbled into, they confront this work of art…and evil. They have to discover what brings it to life. And they have to destroy it—before it destroys them.

From Goodreads:
In this short story from the thrilling anthology FaceOff, bestselling authors Heather Graham and F. Paul Wilson—along with their popular series characters Michael Quinn and Repairman Jack—team up for the first time ever.

Jules Chastain, the last surviving member of a wealthy New Orleans family, has a problem. And he's hired Repairman Jack to fix it.


It seems that Chastain "appropriated" an artifact from a fellow collector, Madame de Medici, and she wants it back. But the item—an ancient ring—is located somewhere in the family mausoleum and Chastain is too terrified of the wrath of his enemies to even leave his house to look for it. Meanwhile, Michael Quinn, himself a bit of an independent contractor, is waiting in the mausoleum when Jack arrives. And it’s Quinn—whose day job at The Cheshire Cat curiosity shop in New Orleans has made him familiar with mystical objects—who tells Jack that they are dealing with more than just a ring. They're dealing with one of the Seven Infernals. Which means a simple retrieval job just got much more dangerous.

Play a song for me…

Musicians are being murdered in New Orleans. But Arnie Watson apparently died by his own hand. When Tyler Anderson plays the saxophone he inherited from Arnie, a soldier and musician who died soon after his return, he believes he sees visions of his friend's life—and death. He becomes convinced Arnie was murdered and that the instrument had something to do with whatever happened, and with whatever's happening all over the city…

Tyler knows his theory sounds crazy to the police, so he approaches Danni Cafferty, hoping she and Michael Quinn will find out what the cops couldn't. Or wouldn't. After all, Cafferty and Quinn have become famous for solving unusual crimes.

They're partners in their personal lives, too. Quinn's a private investigator and Danni works with him. When they look into the case, they discover a secret lover of Arnie's and a history of jealousies and old hatreds that leads them back to the band Arnie once played with—and Tyler plays with now.

They discover that sometimes, for some people, the line between passion and obsession is hard to draw. Only in uncovering the truth can they hope to save others—and themselves—from the deadly hands of a killer.

From Goodreads:
Michael Quinn is accustomed to dealing with the deadly, the dangerous, and the extreme—but a haunted spinning wheel? And on the eve of his wedding? He'll have to risk his life, limb and soul for love to save Danni Cafferty from the cursed creation if he's ever to get them both to the church on time—and live.

From Goodreads:
It's winter and a chill has settled over the area near New Orleans, finding a stream of blood, a tourist follows it to a dead man, face down in the bayou.

The man has been done in by a vicious beating, so violent that his skull has been crushed in.

It's barely a day before a second victim is found . . . once again so badly thrashed that the water runs red. The city becomes riddled with fear.

An old family friend comes to Danni Cafferty, telling her that he's terrified, he's certain that he's received a message from the Blood Bayou killer--It's your turn to pay, blood on the bayou.

Cafferty and Quinn quickly become involved, and--as they all begin to realize that a gruesome local history is being repeated--they find themselves in a fight to save not just a friend, but, perhaps, their very own lives

My Review:
I enjoyed reading these books so much! I really love Heather Graham's writing, and this series was pretty fantastic! I loved so much about these books! Like in Waking the Dead, I was like, go faster, burn those bodies faster!

There were a few elements in these books that made them so spectacular. The characters, and how they were individual, and we really got to know them over the course of these books! The mysteries, and the various investigations that they went on! And the paranormal stuff, and how everything came together, it just worked so well!

In each full length book, I had various theories. And most of them turned out to be true, which was pretty nice! Though I didn't dig and develop them to the extent to what happened in the book, which made for some really great reading!

I really enjoyed the chance to read this whole series all together, well, what's out, and if Blood on the Bayou is the end, well, then the whole series. Because it was just so fantastic and enjoyable and different and great! Just loved it! I still want more!

Loved these books, so great, so awesome, and I'd love to have more, this was/is a pretty great series!

The Dead Play On:

Toys in the Attic:

Blood on the Bayou: