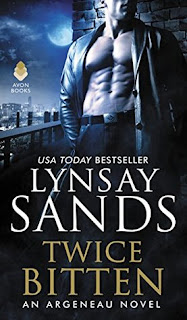 Twice Bitten by Lynsay Sands
Expected Publication: March 27th, 2018
From Goodreads:
Thrilling, witty, and oh-so-sexy, Lynsay Sands’ Argeneau novel brings together a beautiful Immortal and the man who is her destiny…

For someone who’s been around for over a hundred and forty years, immortal Elspeth Argeneau hasn’t done a whole lot of living. Now that she’s moved away from her controlling mother, she’s tracking down rogue vampires and enjoying some overdue freedom. A fling would be fun. A life mate can wait. Yet to Elspeth’s surprise, her landlady’s hot grandson checks both boxes.

Wyatt fell instantly in love with Elspeth four years ago. He’s stunned to run into her again, especially as she has no memory of him. Then again, there are a lot of things about Elspeth that don’t make sense, like the miraculous speed with which her wounds heal. And the chemistry that transforms every touch into an explosion of desire. But with mysterious “accidents” besieging Elspeth, the ex-Special Forces soldier appoints himself her bodyguard. But time is running out to uncover the truth about her enemies—and rediscover the man determined to love her for eternity. 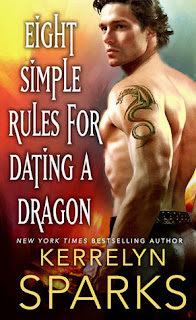 Eight Simple Rules for Dating a Dragon by Kerrelyn Sparks
Expected Publication: March 27th, 2018
From Goodreads:
From the brilliant imagination of Kerrelyn Sparks comes a bold new fantasy romance series in which passion and magic collide. Behold the Embraced…

Gwennore has a talent. An Elf able to track down the cause of an illness and heal it, she’s a valuable asset to her people. But when the kidnapping of a young girl thrusts Gwennore into the very heart of the realm of the dragons, she discovers not only a place of power and magic, but also a haunted land, plagued by an ancient curse that all but ensures extinction to the royal family. But when she meets the smoldering General Silas Dravenko, they strike a bargain—save the country from its cursed illness, and he will return the kidnapped girl. She’s been raised never to trust a dragon, but never did making a deal with the devil feel so good…

Silas has no way of curing the family he’s loyally served for years. But when a beautiful elf, long considered the enemy of the dragons, comes bursting into his world, Silas is awakened to passion and desire in a way he’s never felt before. But can he trust a sworn enemy to save the very existence he holds dear? And can their love survive those that threaten to tear them apart?

I've already read Twice Bitten and it was so great, and I can't wait for it to come out! And Eight Simple Rules for Dating a Dragon looks so great! Her books are fantastic, and I just want it to be out and about in the world! What about you guys? Happy reading!
Posted by Louisa @ Words I Write Crazy at 6:00 AM