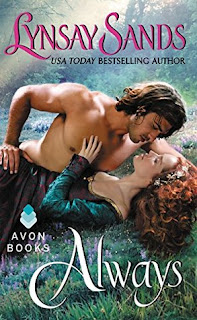 From Goodreads:
Bastard daughter to the king, Rosamunde was raised in a convent and wholly prepared to take the veil... until the good King Henry showed up with the reluctant husband in tow for her. Suddenly, she found herself promising to love, honor, and obey Aric...

But Rosamunde's eduction had not covered a wedding night, and the stables were a poor example for an untried girl. Would Aric bite her neck like the animals did their mates? The virile warrior seemed capable of such animal passion, but his eyes promised something sweeter. And Rosamunde soon learned that while she may have trouble with obeying him, it would not be hard to love her new husband forever.

My Review:
Oh, I really enjoyed this book! I've read a few historical fiction books that I've enjoyed, and this time period that they're in, the end of King Henry's rule, since he died in this book, and where the Church had a lot of strict rules, which called for some hilarity!

There was a bit of a mystery in this book, and that was what the heck was happening, was it deliberate, or was it just accident after accident? It turned out to be a lot more involved then that, and yeah, it was a great element in this book!

The biggest element for me in this book, of course, was the romance! As the synopsis says, Rosamunde was supposed to be a nun, so she didn't get educated on things needed for a marriage-like physical relationships. And the advice that she got...lets just say that it half reminded me of Outlander, and how Jamie only had the animals to go on! So hilarious!

Aric has basically sworn off females and romance. His mother basically slept with all the guys in their house, and then his fiance cheated on him. But Rosamunde wasn't those two, and it was so great to watch them fall in love!

This book was fantastic, and I enjoyed it so much!