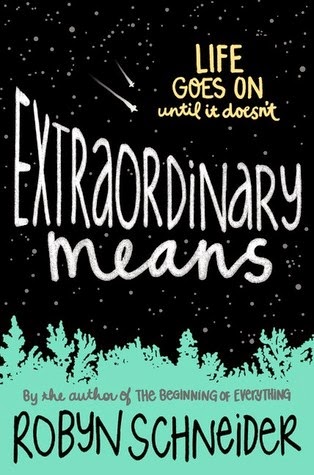 From Goodreads:
From the author of The Beginning of Everything: two teens with a deadly disease fall in love on the brink of a cure.

At seventeen, overachieving Lane finds himself at Latham House, a sanatorium for teens suffering from an incurable strain of tuberculosis. Part hospital and part boarding school, Latham is a place of endless rules and confusing rituals, where it's easier to fail breakfast than it is to flunk French.

There, Lane encounters a girl he knew years ago. Instead of the shy loner he remembers, Sadie has transformed. At Latham, she is sarcastic, fearless, and utterly compelling. Her friends, a group of eccentric troublemakers, fascinate Lane, who has never stepped out of bounds his whole life. And as he gradually becomes one of them, Sadie shows him their secrets: how to steal internet, how to sneak into town, and how to disable the med sensors they must wear at all times.

But there are consequences to having secrets, particularly at Latham House. And as Lane and Sadie begin to fall in love and their group begins to fall sicker, their insular world threatens to come crashing down. Told in alternating points of view, Extraordinary Means is a darkly funny story about doomed friendships, first love, and the rare miracle of second chances.

My Review:
This book was a fantastic read! I really enjoyed the whole idea of sanatoriums in the present, because as it's pointed out in the afterwards, a lot of illnesses are becoming resistant to treatment, meaning that the events in this book could possibly happen. Which is pretty scary. But it's a unique idea!

The fact that Sadie and Lane had previously met, in a summer camp, was really great, because while she believed that he had asked her out only to stand her up, well, yeah, that didn't happen. And that they're now here, a place where they won't infect anyone and can just rest, well, gave them something to connect over!

I loved that we alternated POV's with Lane and Sadie, because they were totally different people. Lane was a school-a-holic, he was in AP classes, and was still talking about college even after he was diagnosed. Sadie has been at Latham house for so long, she doesn't really want to go back.

When a cure/vaccine is announced, Sadie's understandable conflicted, and Lane is happy. Life can go back to normal. Except that she is hurt badly. And it was pretty awful, and we don't see or hear of the guy getting punished. He broke her ribs, and with TB, there's a lot of coughing, so basically, he killed her. And that really, really, really sucked!

I enjoyed the ending, it was soft, and it was a bit hopefully, and was just really enjoyable to read!