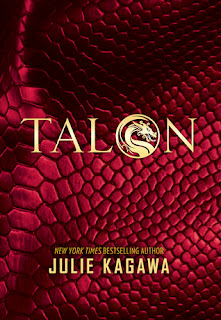 From Goodreads:
Long ago, dragons were hunted to near extinction by the Order of St. George, a legendary society of dragon slayers. Hiding in human form and growing their numbers in secret, the dragons of Talon have become strong and cunning, and they're positioned to take over the world with humans none the wiser.

Ember and Dante Hill are the only sister and brother known to dragonkind. Trained to infiltrate society, Ember wants to live the teen experience and enjoy a summer of freedom before taking her destined place in Talon. But destiny is a matter of perspective, and a rogue dragon will soon challenge everything Ember has been taught. As Ember struggles to accept her future, she and her brother are hunted by the Order of St. George.

Soldier Garret Xavier Sebastian has a mission to seek and destroy all dragons, and Talon's newest recruits in particular. But he cannot kill unless he is certain he has found his prey: and nothing is certain about Ember Hill. Faced with Ember's bravery, confidence and all-too-human desires, Garret begins to question everything that the Order has ingrained in him: and what he might be willing to give up to find the truth about dragons.

My Review:
I loved reading this book! I did start reading it at least a year ago, but didn't get hooked. And there were just so many other books, so I put it down and moved onto other books. And then I picked it up, started from the beginning, and just devoured it! And I'm kinda glad that it worked out this way, because the final book is coming out shortly, so only a short wait! Yeah!

I really enjoyed Ember, this rebel dragon, pushing the boundaries set by her elders. I honestly disliked Talon, because it was just a little more then controlling, and having read the synopsis's of the future books, well, there's so much more wrong with it!

Then there was Garret, who was trying to find the female dragon that they know is there so they can kill another dragon. It's funny, we know it's Ember, but there are other suspects, and there's a connection between them! Love it!

That ending was just action packed! Emotions were running high, plus adrenaline, with St. George attacking, and then that confrontation between Ember and Garret! And then there was her brother's betrayal! So much! And such a great ending! I need to read more!

This book was so fantastic, and I need to read more!