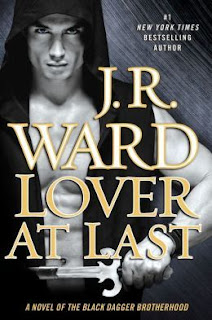 From Goodreads:
Qhuinn, son of no one, is used to being on his own. Disavowed from his bloodline, shunned by the aristocracy, he has finally found an identity as one of the most brutal fighters in the war against the Lessening Society. But his life is not complete. Even as the prospect of having a family of his own seems to be within reach, he is empty on the inside, his heart given to another....

Blay, after years of unrequited love, has moved on from his feelings for Qhuinn. And it's about time: The male has found his perfect match in a Chosen female, and they are going to have a young—just as Qhuinn has always wanted for himself. It's hard to see the new couple together, but building your life around a pipe dream is just a heartbreak waiting to happen. As he's learned firsthand.

Fate seems to have taken these vampire soldiers in different directions... but as the battle over the race's throne intensifies, and new players on the scene in Caldwell create mortal danger for the Brotherhood, Qhuinn finally learns the true definition of courage, and two hearts who are meant to be together... finally become one.

My Review:
This is a book that has been a long time coming. Since maybe book 2 or 3, we've known the trio of John, Qhuinn, and Blay, and since then, we've had a lot of snippets of their story. And now we have the the big push, when they finally get together!

I honestly had a hard time reading this story. Not because it's about Qhuinn and Blay who are gay, but because I've read some reviews of The Chosen, and I know that Qhuinn is going to be a pretty big asshole, and I didn't want to read about him finding his happiness as much because of that. Some of the things he's going to say and do are just despicable!

Qhuinn's got a lot of messed up feelings, because of his eyes, his family was pretty horrible to him, and then there was his disavowal which ended with him almost being killed. Oh, and that being gay is something that happens, but it's a dirty secret that you pretend doesn't exist, you know? Plus, Blay is dating his cousin. We knew most of this from the previous books, but we really delved into his head with this book!

Blay has his own journey on this book, and it was an easier one for me to read, because hey, he isn't going to be the one being awful. Plus, he's had this crush on Qhuinn for a long time, and Qhiunn kept rejecting him. Much easier to read his side of the story!

I enjoyed this book, it was great, it was just a little bit harder then it could've been.