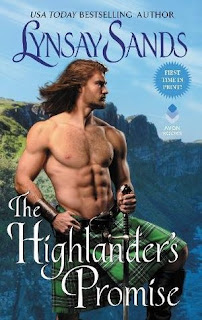 From Goodreads:
In a spellbinding new Highlands story from New York Times bestselling author Lynsay Sands, the laird of the Buchanans finds the one woman who is his equal in passion and courage...

Aulay Buchanan has retreated to his clan's hunting lodge for a few days of relaxation. But the raven-haired beauty he pulls from the ocean puts an end to any chance of rest. Though he christens her Jetta, she knows nothing of her real identity, save that someone is trying to kill her. As she recovers, it will not be easy for Aulay to protect her and keep her honor intact when she mistakenly believes they are man and wife.

Jetta sees beyond Aulay's scars to the brave, loyal warrior she's proud to call her own. But as the attempts on her life grow more brazen, Jetta realizes that not all is as she believes. And if Aulay is not her husband, can she trust the desire flaring in his eyes, or his promise to defend her with his life?

My Review:
Another book in this amazing series! I'm so happy! And that it's Aulay's book, the oldest brother, the one who was scarred in the fight that killed his father and his brother-who we learn, is his twin! So yeah, a pretty tormented guy who deserved happiness!

This book had a bit of a time jump, since the babies who were 5 months or so if I remember correctly, were born. So it was really great when all of the couples from Jo onward gathered together! There was a totally funny story of how that happened, but I won't spoil, because I'm not good at conveying humour!

If I woke up and had no memories, and assumed the guy caring for me was my husband because he was in the room and it would've been improper for him to be there otherwise, well, yeah, it'd be totally confusing but a bit wonderful, too? I just loved them together, they were just so cute!

One funny comment that was made, is that their sister doesn't have any more single friends, for the remaining brothers to marry, and that there was a certain number of brothers unmarried, but Rory didn't count himself among them!

There were a few moments when I was like, how did they pull this off? But then we got an explanation and things became clear! I'm glad that they were caught! While they might have had some pretty hard knocks, that they were in the situation was partially their fault. Not victim blaming, but I can't explain without spoiling!

This was a really great book with a sweet romance, and I just really enjoyed reading it!