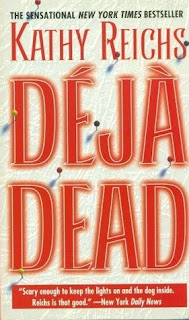 From Goodreads:
People stepping into the world of forensic anthropologist Dr. Temperance Brennan, star of Kathy Reichs' electrifyingly authentic bestsellers. Her life is devoted to justice - for those she never even knew.

In the year since Temperance Brennan left behind a shaky marriage in North Carolina, work has often preempted her weekend plans to explore Quebec. When a female corpse is discovered meticulously dismembered and stashed in trash bags, Tempe detects an alarming pattern - and she plunges into a harrowing search for a killer. But her investigation is about to place those closest to her - her best friend and her own daughter - in mortal danger...

My Review:
This book was so great! I really enjoyed going back to the beginning of this incredible series, and reading it again! This book feels like it's the longest in the series, but that mostly because it's the first, and there's a lot of metaphors and science-y stuff!

It's kinda weird reading this book-I don't remember the particulars of when I first read it, and how that coincides with watching the tv show, Bones, which I just love, and wish wasn't over. And now that it's over, and I'm going back to the books, yeah, it's kinda strange!

I read in other reviews that there's a lot in this book that sets things up, that aren't mentioned again. And I can see that, it is a longer book, and has things like her alcoholism, and a bit about her marriage. I can't wait to see how the future books are different (because I've forgotten, and the later ones, I haven't read yet!)

This book was just so great, and I can't wait to read more!