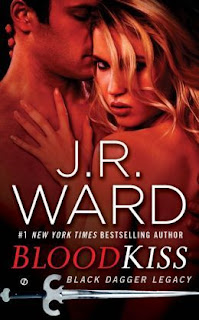 From Goodreads:
The legacy of the Black Dagger Brotherhood continues in a spin-off series from the #1 New York Times bestselling author…

Paradise, blooded daughter of the king's First Advisor, is ready to break free from the restrictive life of an aristocratic female. Her strategy? Join the Black Dagger Brotherhood's training center program and learn to fight for herself, think for herself…be herself. It's a good plan, until everything goes wrong. The schooling is unfathomably difficult, the other recruits feel more like enemies than allies, and it's very clear that the Brother in charge, Butch O'Neal, a.k.a. the Dhestroyer, is having serious problems in his own life.

My Review:
Oh, I loved reading this book! We were introduced to Paradise's dad recently, and then now to have her book, yeah, I really enjoyed that! And then there was Butch and Marissa having problems, which sucks, but is very entertaining to read!

The process that the Brotherhood put the potential trainees though, to weed the numbers down to more manageable numbers to train, well, that was brutal. But these people would be soldiers in the war, so it's understandable. But still brutal!

Paradise and Craeg come from very different backgrounds, an aristocratic female, and a civilian male. And that his dad died because of selfish aristocrats, well, that added some complications! And then that there's a murder, the victim coming to Marissa's doorstep.

Which made Marissa need to be personally involved. And I'm glad, since it's just another way for her to be herself, not the doll the gylmera wanted her to be. Speaking of, her brother, who could be so kind to patients (well, besides Chosens, apparently) and so cruel to her. Hopefully they can heal, but he has some big apologizing to do first!

One thing I've heard about these books, is that J.R. Ward would have preferred to have Butch and V together, but around the time, it wouldn't have been well received. But I can't see it. Sure, definitely from V's side of things. But not Butch, he's a Catholic boy, and there's Marissa. I'm not the author, most definitely, but I just couldn't see Butch not where he is, you know?

Loved this book, and I can't wait to read more of this series!