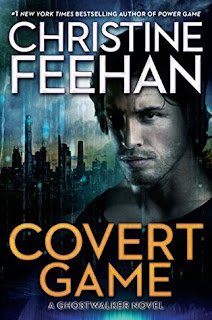 From Goodreads:
Treason, torture and temptation haunt the GhostWalkers in their most dangerous adventure yet, as Christine Feehan's #1 New York Times bestselling series hits an explosive new high.

Rescuing an industrial spy from the hands of a criminal mastermind is a suicide mission for the GhostWalkers. And there's no one more up to the task than Gino Mazza. He's the perfect killing machine--a man driven by demons so dark and destructive that his blighted soul has given up trying to find solace. But his laser-sharp focus on his target has transformed into something nearing desire.

A treasonous senator dangled top secret GhostWalker data in front of a Chinese crime lord, and he bit. Zara Hightower, one of the world's leading experts on artificial intelligence, was sent in to psychically wipe the crime lord's computer network. She succeeded, but at a huge cost. Now she's the captive of a man who has descended into paranoid madness. Torture and death await her...

But GhostWalkers never leave one of their own in enemy territory. And it's up to Gino to save Zara, or kill her if it turns out she's led them into a trap. Either way, heaven or hell won't stop him...

My Review:
It was so great to read this book! In the back of Judgement Road, which I also got from NetGalley (I'm so lucky and thankful!) there was the first chapter of this book, and I read it, was was just so hooked, and I wanted to know what was going to happen next, because Zara was in a really bad situation! And that I was approved right away, so that was fantastic, so of course I had to read it!

Zara thought herself a coward, because she didn't like pain, she wasn't a warrior woman, and Whitney really put her down, because he has a poor view of women, and didn't like others being anywhere near as smart as he was. But she wasn't, she didn't break, even when there was so much pain. And she was protective. She was just fantastic!

In case you've forgotten, like I did, Gino is a member of team 4, and he's a lot like Trap, or at least, in the romantic relationship he wanted. Zara wanted safety, and they were a great partnership together. And something that came up in this book because Bellisia was protective of Zara, is that every partnership is different. Different people want different things, and that's OK!

I have three complaints. The first is, multiple times, the ladies were referred as wives of GhostWalkers, instead of being GhostWalkers themselves. So yeah, that kinda sucked. The other, is that Gino just thought that they'd just have kids, no problem. But there's such a thing as infertility, and given that they've both been experimented on, could cause the odds of being infertile up or down, depending. There's been one or two couples who won't have kids, but the way that he thought/said it, with such confidence, when he doesn't know whether it'll be that easy, and when other couples in the world struggle...yeah. I didn't like it! The final one, is that if it happened, we didn't see the bad guy being told that Zara didn't break. The knowledge that she took the information and didn't break, telling the guy that hurt her that, would've been so perfect, and it didn't happen! Bah!

Yeah, this book was just fantastic, and I can't wait for the next one, maybe it'll be Shylah's book, friend of Zara and Bellisia, who it was hinted could be paired with a guy from a different team, which would be great, given that this is the 4th book, and in a row, of the 4th team!