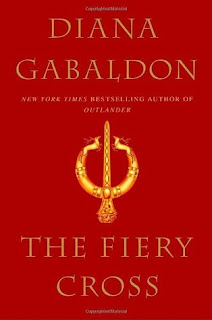 From Goodreads:
The year is 1771, and war is coming. Jamie Fraser's wife tells him so. Little as he wishes to, he must believe it, for hers is a gift of dreadful prophecy—a time-traveler's certain knowledge. Claire's unique view of the future has brought him both danger and deliverance in the past; her knowledge of the oncoming revolution is a flickering torch that may light his way through the perilous years ahead—or ignite a conflagration that will leave their lives in ashes.

My Review:
Wow, this book was just freaking amazing! Taking place over the course of a year, a lot happened! The focus kinda shifted from Claire and Jamie to Brianna and Roger, which was really interesting, and kinda good, because Claire and Jamie don't need anymore conflict! But then there's the war coming, and then also, Bonnet becomes a problem again!

It's been awhile since I read of this series, and that's for a reason, I wanted to read the Lord John Grey series, because most of the series takes place during the 20 year separation in Voyager. But I've barely made a dent, so I decided to start back with this series! Bah! Hopefully I'll read them soon!

One big plotline was their Aunt Jocasta and future Uncle Duncan. Because apparently, Jocasta and 3 kids who all died, 2 as adult, and one as a child. Oh, and someone sent gold, and now someone wants it. So that was a fascinating mystery!

Jamie, and by extension, Claire, had to muster up an armed group to beat back rebellion. On one hand, they had some really good points, like how there's not really law and order or justice, just money, on the other, the war for independence doesn't happen just yet. So Jamie's in a hard spot, and it's just going to get worse from that!

There's also an update with the skull that Claire found in the previous book, that a journal of sorts that was his made its way to them. So that was an interesting update, and also led to them discovering more about time travellers, and how Roger is almost definitely Jemmy's dad.

So much happened in this book, and it was so great to read, I can't wait to read more!