Week 45 Review: 4 Bodies and a Funeral 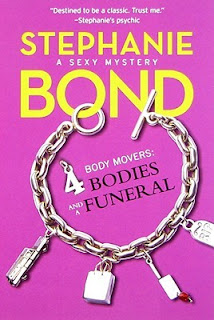 From Goodreads:
Ever had one of those days? A surprise visit from her father--who's on the run from the law--has given Carlotta Wren a lot to think about. Should she join her former fiance, Peter, in proving her father is innocent? If she does, are her body-moving days over? And then...

A close friend's behavior begins to spin out of control...

The cops turn up the heat on her father's case...

Carlotta discovers that her brother Wesley's gambling debts are child's play compared to his new vice...

And the Charmed Killer, a serial murderer, unleashes his wrath on Atlanta.

Now the bodies are piling up--and Carlotta's father is the number one suspect.

My Review:
So this is the book that changes the direction of the series. Because it's the first book where the killer isn't caught in the book, and isn't going to be caught for a while. And you can kinda tell that difference, because before, the covers had dead bodies and such, and now they have charms on them!

Like the last book was Cooper Craft's book, well, this book was Peter's book, because there's the whole case against her parents that he's working on, that she joins him on. Because that was a pretty big thing in her life!

I've read somewhere on the author's website that she plans on doing something like what happened in this book every couple of books, taking the series in a different direction. And that's pretty great, because then things are ever changing, so will never be boring! Yeah!

So there wasn't as much as a resolve in this book as there have been in previous ones, because they don't catch the killer. But they will in 2 more books, and I can't wait for that! I know that it's going to be an epic ending to this plotline, and I can't wait to get to it again!

I enjoyed this book, so, so much, and I can't wait to read more!