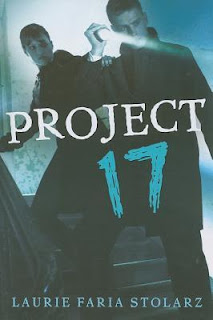 From Goodreads:
High atop Hathorne Hill, near Boston, sits Danvers State Hospital. Built in 1878 and closed in 1992, this abandoned mental institution is rumored to be the birthplace of the lobotomy. Locals have long believed the place to be haunted. They tell stories about the unmarked graves in the back, of the cold spots felt throughout the underground tunnels, and of the treasures found inside: patients' personal items like journals, hair combs, and bars of soap, or even their old medical records, left behind by the state for trespassers to view.

On the eve of the hospital's demolition, six teens break in to spend the night and film a movie about their adventures. For Derik, it's an opportunity to win a filmmaking contest and save himself from a future of flipping burgers at his parents' diner. For the others, it's a chance to be on TV, or a night with no parents. But what starts as a playful dare quickly escalates into a frenzy of nightmarish action. Behind the crumbling walls, down every dark passageway, and in each deserted room, they will unravel the mysteries of those who once lived there and the spirits who still might.

My Review:
This was a pretty dark and creepy book! I mean, a group of teens trespassing in an abandoned state hospital, a mental institution, just before it's going to be torn down, to film a movie? Sounds like a plot of a scary movie to me! The only difference is, that this is a book!

I enjoyed these characters! Not as much, because a lot about this book, I just didn't connect to, but yeah, there were some really great moments with these characters, where they weren't their selves, people who were pretty average, but instead were people going through this pretty scary thing!

Taking the name of the book from the name that he was planning on naming the movie, or vice versa,  was a pretty great choice, because it connects things, a detail that I think only about half of the books that I read, really have. So that was great!

I really enjoyed the trilling mystery of it all, because it was all creepy and stuff, and it's something that I would never do, so being able to experience it through these characters was great. And when it ended, that was pretty great, too!

I enjoyed this book, it was pretty OK, but I won't buy it, and I won't read it again!