Week 47 Review: The Opposite of Hallelujah 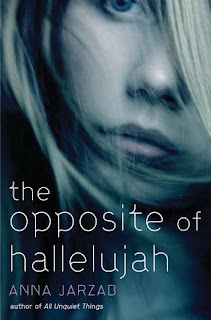 From Goodreads:
Caro Mitchell considers herself an only child—and she likes it that way. After all, her much older sister, Hannah, left home eight years ago, and Caro barely remembers her. So when Caro's parents drop the bombshell news that Hannah is returning to live with them, Caro feels as if an interloper is crashing her family. To her, Hannah's a total stranger, someone who haunts their home with her meek and withdrawn presence, and who refuses to talk about her life and why she went away. Caro can't understand why her parents cut her sister so much slack, and why they're not pushing for answers.

Unable to understand Hannah, Caro resorts to telling lies about her mysterious reappearance. But when those lies alienate Caro's new boyfriend and put her on the outs with her friends and her parents, she seeks solace from an unexpected source. And when she unearths a clue about Hannah's past—one that could save Hannah from the dark secret that possesses her—Caro begins to see her sister in a whole new light.

My Review:
Reading this book was so great! I enjoyed reading it so much, it was just so entertaining and great, and I just wanted to have more! I really enjoyed reading about this family, and what that means to them, with the difficult event in the past that's coming again in the now.

I can understand why Caro acted that way over Hannah. She's basically grown up as an only child, hardly remembers Hannah. And though lying about the situation isn't the smartest choice, well, when it comes to family, who can stay the smartest or most logical?

I really enjoyed this story about family, and how Caro grows to feel like Hannah was a part of her family, instead of it just being something that she knew was true, but didn't feel like it. It was a really great story to read!

I just really enjoyed this book! I can't wait to read more books by Anna Jarzab!