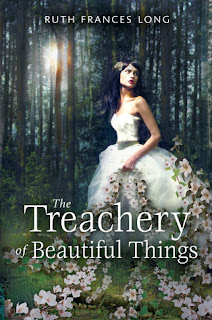 From Goodreads:
The trees swallowed her brother whole, and Jenny was there to see it. Now seventeen, she revisits the woods where Tom was taken, resolving to say good-bye at last. Instead, she's lured into the trees, where she finds strange and dangerous creatures who seem to consider her the threat. Among them is Jack, mercurial and magnetic, with secrets of his own. Determined to find her brother, with or without Jack's help, Jenny struggles to navigate a faerie world where stunning beauty masks some of the most treacherous evils, and she's faced with a choice between salvation or sacrifice--and not just her own.

Jenny, she had to deal with the fact that she was there when her brother disappeared. And then she got this chance to go and find him, and she jumps at it. Partly because of guilt, partly out of sisterly love, and maybe just a little bit because it interested her.

And it was just so awesome to go into this world with her! The whole book was weird, but the world was even more so, strange, alien, and all the details that we learned about, I just wanted to know more, why it was that way! It was really fascinating!

That ending was pretty perfect! With all the complicated politics and such that was going, with the secret about Jenny that she didn't know herself, yeah, that was really just a really excellent ending! I adored it to bits!

I really enjoyed this book, I would love a companion book, and yeah, I can't wait to read more books by Ruth Frances Long!