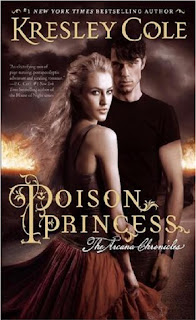 From Goodreads:
She could save the world—or destroy it.

Sixteen year old Evangeline "Evie" Greene leads a charmed life, until she begins experiencing horrifying hallucinations. When an apocalyptic event decimates her Louisiana hometown, Evie realizes her hallucinations were actually visions of the future—and they're still happening. Fighting for her life and desperate for answers, she must turn to her wrong-side-of-the-bayou classmate: Jack Deveaux.

But she can't do either alone.

With his mile-long rap sheet, wicked grin, and bad attitude, Jack is like no boy Evie has ever known. Even though he once scorned her and everything she represented, he agrees to protect Evie on her quest. She knows she can't totally depend on Jack. If he ever cast that wicked grin her way, could she possibly resist him?

Who can Evie trust?

As Jack and Evie race to find the source of her visions, they meet others who have gotten the same call. An ancient prophesy is being played out, and Evie is not the only one with special powers. A group of twenty-two teens has been chosen to reenact the ultimate battle between good and evil. But it's not always clear who is on which side…

My Review:
Oh, this book! I have massive love for it, it was so good, and entertaining, and the pages couldn't fly fast enough! And then it was over too soon, I wish they were longer, but oh, well. I guess I have to deal. But at least it's a series, because I want more of this world!

I loved the contrast between regular life, and then the apocalypse hits. Because Evie is different in both sides, because she's dreamed of it happening, so she hid that, but then life is hard post apocalypse, so there's that to change a person!

There was the weirdness that was the visions of the card of Death, sent by the card of The Fool, and then there's the Archer, yeah, there was that big ball of strange! Especially as the apocalypse was started as the setting for the game involving the tarot cards!

That ending was such a cliffhanger! I mean, Evie has just used her pretty scary powers right in front of Jack, and yeah, we don't know how he's going to react, and we want him to be with Evie, but if he reacts badly, that would be a less likely prospect!

This was such a fantastic, amazing, wonderful book! Love it so much, and I can't wait for more!