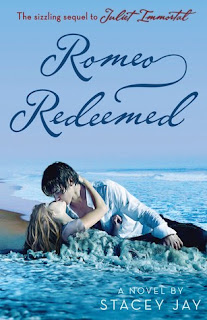 From Goodreads:
Cursed to live out eternity in his rotted corpse, Romeo, known for his ruthless, cutthroat ways, is given the chance to redeem himself by traveling back in time to save the life of Ariel Dragland. Unbeknownst to her, Ariel is important to both the evil Mercenaries and the love-promoting Ambassadors and holds the fate of the world in her hands. Romeo must win her heart and make her believe in love, turning her away from her darker potential before his work is discovered by the Mercenaries. While his seduction begins as yet another lie, it soon becomes his only truth. Romeo vows to protect Ariel from harm, and do whatever it takes to win her heart and soul. But when Ariel is led to believe his love is a deception, she becomes vulnerable to Mercenary manipulation, and her own inner darkness may ultimately rip them apart.

My Review:
This book was really good! I mean, we knew that Romeo was bad in the first book, but the title of this one is Romeo Redeemed, so yeah, I was pretty sure that the title was going to come true in the plot! And it did!

I enjoyed that they went through these events that were in Juliet Immortal, and how they were different, because Juliet wasn't in them, and so yeah, there was Romeo and Ariel, and yeah, their story was really interesting, I liked that twist!

The whole idea that he's getting a second chance with the Ambassadors, was kinda weird, seeing how they were the ones that were trying to put a buffer between Juliet and the guy she fell in love with. So yeah, there was that. But I guess they decided that since they were losing Juliet, they could work with Romeo!

That ending was pretty great, it resolved things very nicely, though, again, still weird to have them in their first lives, and doing that, because that's just weird for me, why wouldn't they want to be in the present? Well, I guess I'm biased!

This was a really fantastic book, and I need to read more Stacey Jay books!