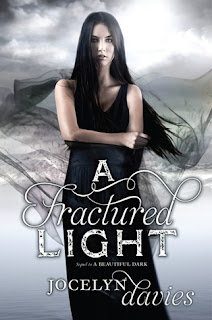 From Goodreads:
When she wakes up in unfamiliar surroundings, Skye knows something terrible has happened to her. It's not until she hears Asher, the dark, rebellious angel she fell in love with, that the memories come flooding back. She tries to put the past behind her, but she knows she'll be forever haunted by the ruthless betrayal that almost took her life.

Skye returns home, but with the knowledge of who she really is, nothing can ever be the same. As she tests the limits of her newfound powers, Skye discovers that she's capable of far more than anyone could have imagined. Both the Order and the Rebellion want her for their side as war between the factions looms. She can't forget the terrifying truth she now knows about the Order, but something holds her back from embracing the Rebellion.

My Review:
So after the cliffhanger that was the previous book, this book picks up pretty quickly! And boy, is there action in this book! And I just wanted to have more, so I'm so glad that there's a 3rd book! But we got another cliffhanger, an even worse one, at the end of this book!

This is the book where we learn more about this world, and where Skye makes her choice after learning all that stuff. It most definitely doesn't suffer from middle book syndrome, because it was just so good, with a lot going on!

She learns more about her parents, which is what influences her choice in the end. And honestly, her choice, of a mix of both, I think that it's the best one. I'm all for compromise, and this struggle, it's one of the most primal!

But what really sucks, is that while Daniel who was part of the order side, joined her, that Asher, of the Rebellion, the guy that she loved, didn't. That really sucked, and Skye's going to have a big struggle ahead of her, and I can't wait to get to that!

Boy, was this a great book, and now I just desperately want the final book!