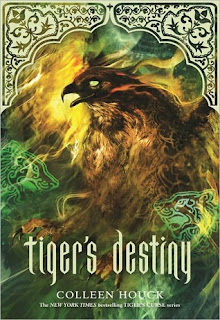 From Goodreads:
With three of the goddess Durga's quests behind them, only one prophecy now stands in the way of Kelsey, Ren, and Kishan breaking the tiger's curse. But the trio's greatest challenge awaits them: A life-endangering pursuit in search of Durga's final gift, the Rope of Fire, on the Andaman Islands in the Bay of Bengal.  It's a race against time--and the evil sorcerer Lokesh--in this eagerly anticipated fourth volume in the bestselling Tiger's Curse series, which pits good against evil, tests the bonds of love and loyalty, and finally reveals the tigers' true destinies once and for all.

My Review:
While there aren't any other books published in this series, there is Tiger's Dream on Goodreads that says it's the final Tiger's Saga book. But if it's published, it's probably going to be a) self-published, and b) probably going to have to have a wait for it, because of that. Because this book ended things pretty well! I'd still welcome more, though!

So yeah, there's that complicated love triangle stuff going on. And between the beliefs that both boys have, and Kelsey's heart, well, yeah that's a pretty big mess! But it's resolved, mostly! Or totally, it kinda depends a bit on which ending you go with!

The Chosen One thing was handled very well, I enjoyed all that. And yeah, it was all twisted around, and yet, made perfect sense in the end! So yeah, that was just really well done! I loved reading about that so much!

When they were in the past, and working with that girl? And that girl was going to end up being Durga, or a version of her? Yeah, that was awesome. And that Kishan would stay there with her? Sad, but a pretty good ending!

I really enjoyed this book a lot, it had a happy endings for most of the characters, or characters heading towards happy endings. Which is why I'd love to have Tiger's Dream, but not expecting it!