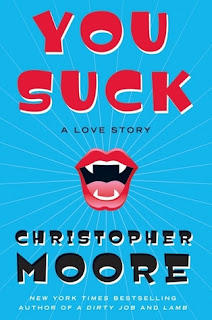 From Goodreads:
"You bitch, you killed me. You suck."

Being dead sucks. Make that being "un"dead sucks.

Literally. Just ask Thomas C. Flood. Waking up after a fantastic night unlike anything he's ever experienced, he discovers that his girlfriend, Jody--the woman of his dreams--is a vampire. And surprise. Now he's one, too.

For some couples, the whole biting-and-blood thing would have been a deal breaker. But Tommy and Jody are in love, and they vow to work through their issues. Like how much Jody should teach Tommy about his new superpowers (and how much he needs to learn on his own). Plus there's Tommy's cute new minion, sixteen-year-old goth girl Abby Normal. (Well, "someone" has to run errands during daylight hours )

Making the relationship work, however, is the least of Jody and Tommy's problems. Word has it that the vampire who nibbled on Jody wasn't supposed to be recruiting any new members into the club. Even worse, Tommy's erstwhile turkey-bowling pals are out to get him, at the urging of a blue-dyed Las Vegas call girl named (duh) Blue.

And that really sucks.

So Tommy has about the appropriate response for being turned into a vampire. I could've done without the swearing, but I think about a good half of people would be angry and upset over being turned without their consent.

I haven't read the first book. And with the way that I felt about this book, well, I'm most likely not going to read it. Maybe, if I'd read it first, then things might've made more sense, and not been all over the place, I might've enjoyed this book more. Oh, well.

I know that it sounds really weird. But it was really funny, which was about it's only redeeming quality. Sure, it felt true, what the characters actions were in this world of vampires, but the funny was the only part that I really liked.