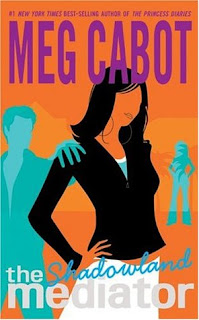 From Goodreads:
Suze is a mediator -- a liaison between the living and the dead. In other words, she sees dead people. And they won't leave her alone until she helps them resolve their unfinished business with the living. But Jesse, the hot ghost haunting her bedroom, doesn't seem to need her help. Which is a relief, because Suze has just moved to sunny California and plans to start fresh, with trips to the mall instead of the cemetery, and surfing instead of spectral visitations.

But the very first day at her new school, Suze realizes it's not that easy. There's a ghost with revenge on her mind ... and Suze happens to be in the way.

My Review:
I just absolutely loved rereading this series again! Of the beginning of the series, of Suze and Jesse, and knowing where they're going to go, but forgetting the little details, that make everything so much better! So yeah, really great to reread!

These books are pretty short. But they have a lot in them, and they are just so excellent to read, I mean, after all, they are Meg Cabot books after all, and I really enjoyed them the first time! And I did so again, this time, and I know I'm going to continue to!

I just love these characters! Suze, Jesse, her friends, her family, and the ghosts that she has to deal with. And Father Dominic, a fellow mediator. They were just so fantastic to be able to read about again! I just loved it!

And sure, Heather had reason to be mad, she died, and then the guy that she died over moved on pretty quickly. But she shouldn't have taken it out on Suze, who came onto the scene after all the big drama stuff happened!

It was so great to go back to the beginning, when Suze and Jesse interact for the first time, and I just need to read more!

Author: Meg Cabot
Series: Mediator #1
Read: November 14th, 2012
Source: Bought
Reason Why: Must read all Meg Cabot's books, and reread if it's been a while, like this series!
Publisher: Harper Teen
Published: November 1st 2000