Week 2 Review: The Loneliest Girl in the Universe 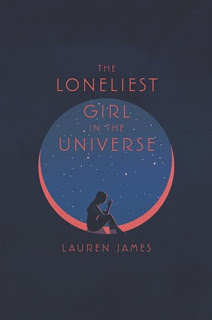 From Goodreads:
A surprising and gripping sci-fi thriller with a killer twist

The daughter of two astronauts, Romy Silvers is no stranger to life in space. But she never knew how isolating the universe could be until her parents' tragic deaths left her alone on the Infinity, a spaceship speeding away from Earth.

Romy tries to make the best of her lonely situation, but with only brief messages from her therapist on Earth to keep her company, she can't help but feel like something is missing. It seems like a dream come true when NASA alerts her that another ship, the Eternity, will be joining the Infinity.

Romy begins exchanging messages with J, the captain of the Eternity, and their friendship breathes new life into her world. But as the Eternity gets closer, Romy learns there's more to J's mission than she could have imagined. And suddenly, there are worse things than being alone...

My Review:
I loved reading this book! I mean, it doesn't come out for another 6 months! It just sounded really great, and I just couldn't help myself from starting it, and then the pages just kept turning and I couldn't stop, it was just so freaking good!

Told over the course of about a year, Romy has been alone for a number of years now taking care of the ship since her parents died. Though there was a bit of a mystery there, and also with the dead astronauts. But soon, she won't be alone, because another ship is coming! Which meant that she wouldn't be the only one who could help her survive, and do all the science-y stuff!

I did read the ending before I got too far in, so I knew most of what was coming. Her relationship with J was a big part of that, and watching it unfold over messages that were sent, and kept being sent, without response at first, because of the closing distance between them.

There were a lot of revelations at the ending, like why the bad guy did what he did. And finding out the extend of what he did. There were moments of pure terror mixed with some breathing room, and that made for a really explosive ending!

This book was just absolutely wonderful, and I'm going to have to check out her other books!