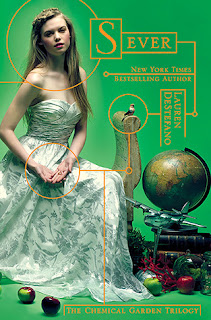 In this bleak landscape, young girls are kidnapped and forced into polygamous marriages to keep the population from dying out. When 16-year-old Rhine Ellery is taken by "the Gatherers" to become a bride, she enters a world of wealth and privilege. Rhine has only one purpose after she has been married to her new husband, Linden: to escape and find her twin brother.

But Rhine has more to contend with than losing her freedom. Linden’s eccentric father is bent on finding an antidote to the genetic virus that is getting closer to taking his son, even if it means collecting corpses in order to test his experiments. With the help of Gabriel, a servant to whom she is dangerously attracted, Rhine is desperate to learn the truth and protect those closest to her. But, as her sister wife Cecily keeps insisting, her role may be much bigger than that.

In the first two books of the Chemical Garden trilogy, Wither and Fever, Rhine struggles to escape the mansion and then to navigate the brutal world outside. Now in Sever, the third and final book, Rhine uncovers some shattering truths about the past that her parents never had the chance to tell her and the alarming implications regarding her own genes. She may be the one who can save the human race.

Oh, I want this book now! It's the last book in the Chemical Garden series, and I want it now! What are your guy's picks? Happy reading!
Posted by Louisa @ Words I Write Crazy at 6:00 AM