Week 49 Review: The Secret of the Keepers 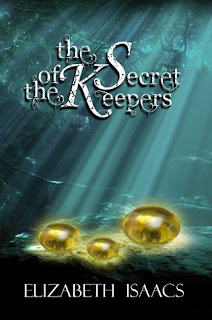 From Goodreads:
Life for Nora couldn't be better; she has married the man of her dreams and loves living in the pristine land of Kailmeyra.

That is, until the darkness threatens her perfect world.

Now war is upon the land. She and Gavin must strengthen their clan and prepare to fight. But the enemy has an ally—one that not only wields power, but holds knowledge of the ancients' secrets. Secrets that could destroy creation itself.

As the darkness grows, doubt seeps in ... protectiveness hinders progress ... and the unthinkable comes to pass.

Bewildered and alone, Nora shoulders the responsibility of leading an entire race to war. As she struggles with decisions that seem impossible to make, she is haunted by one choice.

"No one has ever doubted that you would die for those you love. The question then becomes ... would you live?"

My Review:
Oh, great book! And it was so awesome to see Nora and Gavin again! Though the ending was a bit bittersweet, being in this world more then made up for that, and my enjoyment of this book was off the charts!

It was really fantastic to read this book, and have all the more time in this world, but there were things going on, and it is a book, which means that to be good, it has conflict, and boy, does this book have conflict!

We got to learn so much more about this world, and it was really fascinating, how things worked, and how the characters were connected, because there were a few unexpected things! An absolutely pleasure to read!

It was just so great to see Nora and Gavin again, even if there was everything that was going on, was going on! They were just so great characters, and I wanted more of them. And yeah, that we get even more, with the 3rd book, yeah!

Such a fantastic book, and now I just really want that 3rd book now!