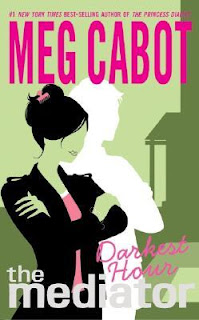 From Goodreads:
When the nineteenth--century ghost of Maria de Silva wakes her up in the middle of the night, Suze knows this is no ordinary visitation -- and not just from the knife at her throat, either. In life, Maria was the fiancee of Jesse -- the same Jesse who was murdered a hundred and fifty years before. The same Jesse Suze is in love with.

Maria threatens Suze: The backyard construction must cease. Suze has a pretty good idea what -- or rather, who -- Maria doesn't want found. But in solving Jesse's murder, will Suze end up losing him forever?

My Review:
Oh, so great to read this book! I just love this series, and I said in the last book, that the other was one half of the middle of the series-this is the other half. It's also where the focus changes from single, contained mysteries, to over-arcing ones, like Jesse, and Paul! So awesome!

This is the first book that has Paul in it. And his actions have a lot of consequences, so yeah, that was something of an introduction! So great, though I wish that we could've also gotten his brother in the next two books, he was a really cute kid, and fun to read about!

Then there was the fact that Jesse's body was being dug up in her backyard for a hot tub, well, yeah, that was a pretty big situation! And then that Maria and her husband, come back as ghosts to threaten Suze, well, not fun!

But oh, that ending! Getting Jesse back with the ritual, and having Paul and Maria being their selves to Father Dominic, and then having some kick ass on the good guys side, which was just so fantastic to read!

Such a great book, and I just really can't wait to reread more!