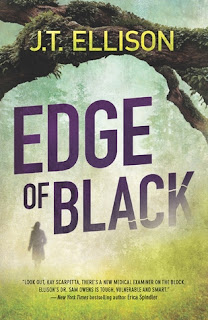 From Goodreads:
Dr. Samantha Owens is starting over: new city, new job, new man, new life. She's trying to put some distance between herself and the devastating loss of her husband and children—but old hurts leave scars.Before she's even unpacked her office at Georgetown University's forensic pathology department, she's called to consult on a case that's rocked the capital and the country. An unknown pathogen released into the Washington Metro has caused nationwide panic. Three people died—just three.

A miracle and a puzzle.

Amid the media frenzy and Homeland Security alarm bells, Sam painstakingly dissects the lives of those three victims and makes an unsettling conclusion. This is no textbook terrorist causing mayhem with broad strokes, but an artist wielding a much finer, more pointed instrument of destruction. An assassin, whose motive is deeply personal and far from understandable.

Xander Whitfield, a former army ranger and Sam's new boyfriend, knows about seeing the world in shades of gray. About feeling compelled to do the wrong thing for the right reasons. Only his disturbing kinship with a killer can lead Sam to the truth-and once more into the line of fire.

My Review:
This was a really fantastic book! I loved the mystery in it, because it was deeper, and yet more focused then the first one, the bad guy had a specific few people that he wanted to hurt. And what was even worse, was what he had along with him.

So there's Xander and Fletch, and they were both really great guys, and both of them cared for Sam. But honestly, I liked Xander more, mostly because Sam picked him, and he'd been through some hard times, and was still getting by-just like Sam.

So a biological weapon, that only kills a few, but makes everyone else sick, is, if it has to be used, half kind, half not. Because being sick sucks, but dying is even worse. But the bad guy is the bad guy for a reason!

This was such a fantastic book, I enjoyed it so much! And I can't wait for more!