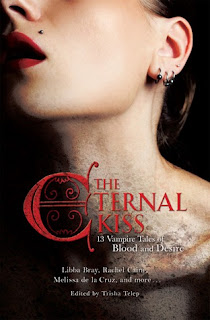 From Goodreads:
There's an allure to vampire tales that have seduced readers for generations. From Bram Stoker to Stephenie Meyer and beyond, vampire stories are here to stay. For those fresh-blooded fans of paranormal romance or for those whose hunt and hunger never dies, these stories have what readers want!

My Review:
Oh, another great, fantastic anthology! And about vampires! One collection of stories about YA vampires, sign me up! And with such wonderful authors that I've enjoyed so many other times, well I knew that I would enjoy it! And I did, so much!

I found it fantastic, and even with such a narrow theme for the anthology, that there were still a variety of stories! I mean, I know I should've expected it, but I didn't, and that made it all the better to read them all!

This is another anthology in the 13 Tales series, so I really hope, and I think, that it's set after Kiss Me Deadly, because of the Sarah Rees Brennan and Karen Mahoney stories, which had the same characters in their stories in both of the anthologies!

I really enjoyed where these stories went, even if they were short stories, because they had something to say, they had a journey to take,and they went on it, and that was just really great to read, and I really enjoyed that!

Really fantastic anthology, and I enjoyed reading it so much!