The Betrayal: Review and Excerpt 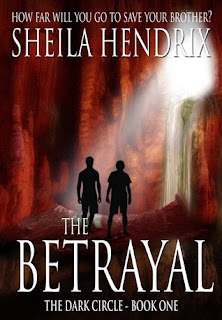 From Goodreads:
One brother races against time to save the other before it's too late. When Matt has a dream, it sends two brothers on a hunt for a cave. Matt doesn't know why they have to go there; he just knows they have to go. When they arrive, Matt finds out that the vision turns out to be a trap. A Darkness like no other wants to control Matt and kill Zack. When a demon asks Zack a question, "How far will you go to save your brother," Zack replies, "As far as I have to." Now something like they've never faced before is on a deadly mission to destroy everything the brothers hold dear and if they are not careful, neither of them will be able to escape.

My Review:
This was a really fantastic book! Though I don't know why Matt would listen to a dream, especially when it has such bad consequences! But I think that the lesson was learned by the end, after all that they went through!

There were a few problems with this book. Like, while it says that it's a series, that it's the first book, things didn't feel new, they felt more from a middle of a series then anything else. And the fact that it seemed like everything that was happening to them was pretty similar.

In a way, I could see some similarities to the TV supernatural, about two brothers, and the supernatural stuff, but this is a book, and not a TV show, and yeah, all the other differences. But there was that similarity that I liked!

Really awesome book, I enjoyed it a lot! Great story about brothers!

Excerpt:
He roamed through the cave, listening to the sounds around him. Water dripped into an underground pool further down, the drops spaced several seconds apart and the splash echoing off the rocks. Sand and pebbles crunched under his feet, and wind whistled across the cave opening, all of it familiar. He’d walked that cave a million times for a million reasons. His domain — where he drew his strength — also became his weakness at times, for the cave was alive.

His name, Alanya, meant The Destroyer. He wandered the ages, seeking to slaughter people who held special gifts. He fed on them for their strength and power, each special power offering a distinctive flavor. Their cries resonated in the cave’s memory; their blood splattered on its walls and drenched its floors. If he closed his eyes and concentrated, he could still smell the coppery tang.

Strolling to the mouth of the cave, he looked at but didn't see the forest. His mind seethed in his hatred for the brothers Zachariah and Matthew McCannon.

Bio:
Sheila Hendrix is a native of Alabama and resides there with her husband of seventeen years. Her
only children are her six dogs. She works as a nurse for a nursing home and also does reviews for a
magazine, although she hasn’t done that in awhile because she’s been busy writing her own Young Adult series.


Sheila has always wanted to write but never thought she’d be able to. It’s been a dream of hers since
she was a little girl. She practically raised her little brother because her parents both had to work. She
had to grow up fast and that was where she got the idea of writing about two brothers whose parents
abandoned them when they were little.

The Dark Circle book series is her paranormal series she’s working on right now. She got the idea for
The Betrayal after having a nightmare that stayed with her for days.

Her hobbies are reading, writing, gardening, traveling, hiking, camping and swimming. She is currently in school to earn her Associate Degree in Paralegal studies but her dream is to write.