A Matter of Time: Review 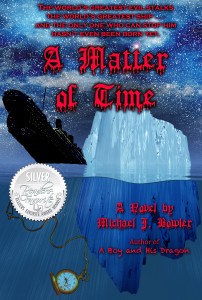 From Goodreads:
What is your destiny? This question haunts 20-year-old Jamie Collins. A junior at Santa Clara University in 1986, Jamie has lots of friends, a professor whom he regards as a mentor, and a promising future as a writer. Then the dreams begin - nightmares leading him to a destiny beyond belief. These visions transport him to a time and place fifty-five years before he was born: Titanic's maiden voyage in 1912 With less than a week to go before the 75th anniversary of its sinking, Jamie learns that his fate is inexplicably linked to that of the famous vessel. Somehow, the two timelines are overlapping, and when Titanic dies, Jamie will die along with her. Those dreams reveal something evil stalking the ill-fated ship, something that expedites the collision which sinks the great liner. Jamie comes to realize that because of his connection, he may be able to prevent the world's greatest maritime disaster, and save his own life in the process. But how? How can he stop a ship from sinking in 1912 when he hadn't even been born yet? And even if he can stop it - should he? What will be the effect on history if he succeeds? Jamie's quest to fulfill his destiny ties friends and family together in ways he could never have imagined. A Matter of Time is an emotionally charged voyage into the value of friendship, the power of love, the impact of evil, and the vagaries of Fate.

My Review:
I really enjoyed reading this book! It was unique, in that it was set in the 80's, which ended more then 4 years after I was born, but it's been referenced in pop culture for while I've been growing up. So that was fun to read about. And then there's the part on the Titanic, that that mix, well, it was one that I really, really, really enjoyed, because it's not something that I've read before, and I'm always looking for the next unique read! And A Matter of Time definitely provided that!

Something that I didn't really like, was how the transitions from POV characters was handled, especially in the beginning, we'd be getting Jamie and him thinking, and then suddenly, with no warning, no breaks, it'd be Jay, or his girlfriend narrating, and then suddenly it'd be back to Jamie, and I wish that there'd be a  bit of warned for that, so I knew that it was switching, it's something that I don't mind in romance books, but this wasn't a book about a couple. So yeah, that wasn't something that I enjoyed. But the rest of the book more than made up for that for me!

As a side note, I was watching Doctor Who, and then I was thinking of this book, and from Doctor's 9 to 11, there's been 1 episode that's really had vampires, if I remember correctly, and it wasn't true traditional vampires in the sense that there were fishes that disguised themselves as human. The first episode that has Rory travelling with them. So if one of the most popular time travel stories hardly uses vampires, that a book would do that speaks rather positively on the creativity of the author, that the strange and weird, combined with the weirder and the "we're almost kinda used to it" of time travel and vampires, well, yeah, that just came together in a wonderful book!

I really enjoyed this book. It had some flaws, but then, most things do, and there's not much we can do about it. So I have to say, I really loved this book, I had a great time reading it, so I hope you guys check it out, because it was a really good read! 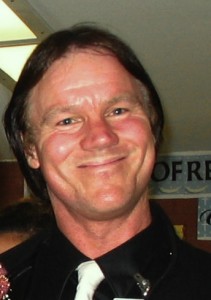 Bio:
Michael Bowler grew up in San Rafael, California. He attended St. Raphael's School and Marin Catholic High School before attending Santa Clara University. Titanic and her tragic fate fascinated him for as far back as he can remember. He has a vast collection of artwork, memorabilia and virtually every book ever written about the disaster.

He majored in English and Theatre at Santa Clara and got a master’s in film production from Loyola Marymount University. He partnered with two friends as producer, writer, and/or director on several films, most notably “Fatal Images,” “Dead Girls,” “Hell Spa” (later re-edited and titled “Club Dead”), “Things” and “Things II.”

He has written a number of unproduced screenplays and is currently working on other novels he has outlined. He’s been teaching high school in Hawthorne, California for over twenty years.

He has also been a volunteer Big Brother to seven different boys over 28 years with the Catholic Big Brothers Big Sisters program and a volunteer within the juvenile justice system in Los Angeles for 27 years.  He is a passionate advocate for the fair treatment of children and teens in California, something that is sorely lacking in this state.

Stops on the Tour:
Tuesday, September 4
Interview at Blogcritics
Book Giveaway at Goodreads

Tuesday, September 11
Guest Blogging at My Book Addiction and More

Thursday, September 13
Interview at Between the Covers

Thursday, September 20
Book Featured at Mary’s Cup of Tea
Character Interview at Beyond the Books

Friday, September 28
Book Review at Books Books and More Books
Posted by Louisa @ Words I Write Crazy at 12:00 AM