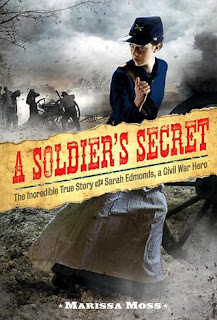 From Goodreads:
The story of Sarah Emma Edmonds, who masqueraded as a man named Frank Thompson during the Civil War. Among her many adventures, she was a nurse on the battlefield and a spy for the Union Army, and was captured by (and escaped from) the Confederates. The novel is narrated by Sarah, offering readers an in-depth look not only at the Civil War but also at her journey to self-discovery as she grapples with living a lie and falling in love with one of her fellow soldiers.

My Review:
This book was really great! The idea that a female impersonated a guy, to be a solider in the Civil War, and did a really great job-both at the impersonation, and at being a solider, well, yeah, that's pretty awesome!

Loved reading Sarah's story! I really thought that she was going to get into trouble that she couldn't get out of, but she had both incredible luck, and incredible skills! Such a fantastic read, watching her journey! So good!

And then there's the fact that the secondary title, mentions that this is a true story. Which is pretty incredible! I mean, she did all of that, and had the audacity to do it, and it all worked out like it did? That is pretty darned cool!

I loved the history, and what she was able to do, it was really awesome, and those details about what it was really liked, well, yeah, that was pretty darn awesome! The details were just the best to read, and I enjoyed them so much!

This was a really great book, one that I enjoyed a lot!