Week 38 Review: Not This Time 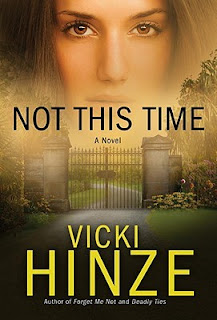 From Goodreads:
Small town scandal. International terrorist attack. Who among them is the traitor?

Sara and Beth have built a multi-million dollar business together, but their once solid friendship is now strained. Beth is leery of Sara’s husband, and when he is kidnapped, authorities consider Beth their prime suspect.

Then, their small town of Seagrove Village is rocked by an act of terrorism, and Beth doesn’t know who to trust. Someone she knows is linked to the attack, but who? Is there a connection to Crossroads Crisis Center? In the midst of the confusion and fear, Beth finds herself attracted to a man from her past. She knows she shouldn’t fall in love with him, but she can’t resist or even explain their bond. As her world unravels around her, she wonders, is it possible to be beyond redemption?

It was a bit hard to get into at first, I had to stop thoughts of skimming ahead, but I had to read the ending, to make sure it ended in a good place, to make sure that the time to read it wouldn't be wasted. And it wasn't, but it came close.

I enjoyed the mystery. Terrorism, for me, it's a far off concept that happens in places I've been been, and most likely never will, besides New York. So having it here, in this book, that was an experience! Probably one that most people, from teens to adults should have, about how some of the world is.

And I could tell why Beth didn't like Sara's husband, I didn't like him either! He wasn't very nice in pretty all of the moments he had in this book, and yeah, seeing how things played out, I just wish Beth hadn't had to live with the town's suspicion hanging over her head!

This book wasn't for me. It was enjoyable and entertaining, but it wasn't my cup of tea. But I know it's others, so yeah, it is a good book!

Author: Vicki Hinze
Series: Crossroads Crisis Center #3
Read: September 18th, 2012
Source: Library
Reason Why: Was supposed to get it from Blogging For Books, but I didn't have my email matched up, so yeah, wanted to read it, so got it from the library!
Publisher: The Doubleday Religious Publishing Group
Published: February 21st 2012