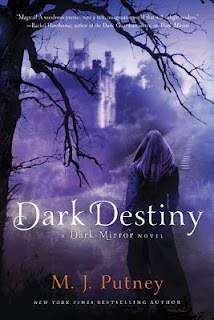 From Goodreads:
Tory and her friends are celebrating the success of a second mission to aid WWII Britain when an urgent summons calls them back to their own time: Napoleon is on the brink of invading England. Can a handful of young mages stop an army?

In desperation, Merlin's Irregulars ask Rebecca Weiss, an untrained telepath from 1940, to come back to 1804 and change Napoleon's mind before it’s too late. As Tory and Allarde make a commitment that will cost him his inheritance, Rebecca promises to do what she can to stop Napoleon even though she is unsure of her magical abilities.

But Tory and her friends saved the Weiss family from Nazi imprisonment, and Rebecca will risk anything, even her life and her budding relationship with Nick Rainford, to repay them. A daring mission takes Tory and Rebecca and their friends into the heart of the Army of Boulogne, where Napoleon is plotting invasion.

But while their success may save England, they must still face the bittersweet consequences of their decisions when they return home.

My Review:
This was such a fantastic book! Bringing everything from the first 2 books, and having it different, because this time, the threat comes from 1804! With Napoleon! Which was really interesting! And then it wasn't over!

So having Rebecca brought back to the past, that was really interesting! And then her using her gifts on Napoleon, and how that worked out, that was just the best! This is just such a great time travelling magic series!

Romance was once again threatened, mostly by Society, which is again for Tory and Allarde, which we learned about in the first book. And then Jack worries about Cynthia giving up her position, and that she'd regret it. Finally, Rebecca and Nick have some troubles!

I really want a 4th book, to have some more happy endings, to find out how it plays out with Elspeth feeling she needs to be at the school, to have society come back to accept magic in the peers, to explain the look that was about Tory in Dark Mirror! It's been bugging me! Oh, and just to spend more time in this world!

This was a really fantastic book, and yeah, I'd really love a 4th bok!