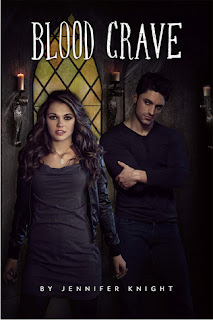 From Goodreads:
Headstrong heroine Faith Reynolds returns in this thrilling sequel to the paranormal romance Blood on the Moon!

After surviving being kidnapped by a vampire, Faith would just love to focus on some alone time with her hot (though occasionally furry) boyfriend, Lucas. Unfortunately, with a vampire uprising on the horizon and her best friend, Derek, about to wake up and find himself transformed into a half-werewolf, half-vampire being without a beating heart, Faith has a few other things to take care of first.

Faith is not without help, in the form of her newfound powers of sensing people's emotions and being able to influence werewolves' actions, not to mention her begrudging but rather helpful boyfriend. Even so, convincing a werewolf packmaster to prepare for an epic battle may be difficult to do without solid evidence.

Lose yourself once more in the deliciously suspenseful world of werewolves versus vampires, otherworldly boys with deadly charm, and addictive, spine-tingling action and romance!

My Review:
Oh, this was really fantastic! I hadn't read the first book, so it was slightly confusing at first, but things made sense after a bit, and things just flew! This was a really great book to read, entertaining, interesting, and just well written! I enjoyed it a lot!

I enjoyed the world that was in this book so much! The details made sense, and came together in a way that made the paranormal seem normal, because they were dealing with these issues, and the other stuff that was a common part of their lives wasn't any big deal! So great!

I'm going to have to read the first book. Firstly, because I enjoyed this book so much! It was really great! Second, because I need to see where it started and for things to make sense. Thirdly, so that anything in the 3rd book which there has to be, which I'll have to read, makes totally sense!

This was a really great book, so enjoyable and great! More!