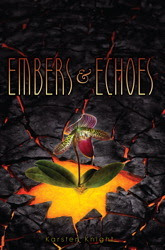 From Goodreads:
Fan the flames: A teen goddess fires up her search for love and family in this sequel to Wildefire. Ashline Wilde may have needed school to learn that she is actually a reincarnated goddess, but she’s ready to move beyond books. She leaves her California boarding school behind and makes for Miami, where she meets a new group of deities and desperately seeks her sister Rose, the goddess of war. But she’s also looking for love—because even though her romance with Cole had to be snuffed, Ash is a volcano goddess—and she doesn't get burned.

My Review:
I thoroughly enjoyed reading this book so much! Such a great sequel, there was a lot going on, from the experiences of a little girl Ash has (not herself), the new characters, and dealing with Cole's latest plan. Because it's not the best! But there's also some romance, yeah!

I really enjoyed the new characters, well, most of them! Some of them, weren't so nice! But the nice ones, I did enjoy! They were full of spunk, of course, which is seeming to be a trademark in the series, and hopefully, in all books by Karsten Knight! So entertaining!

So between her sisters, which was why Ash was having those visions, there's 3 of them. But it's more complicated then that. Because it turns out that her sisters, along with her, are the 3 parts of an ancient goddess. Which I'll bet there's a story in there!

That ending hurt! I mean, after the ending, when she finds out about Cole, yeah, that was bad. But this ending, where her sisters want to merge to become Pele again, and that they'd do it against her will. Not the best thing to hear!

I enjoyed this book so much, so much happens, and I just want more!