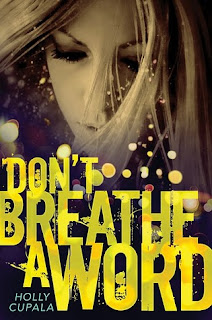 From Goodreads:
Joy Delamere is suffocating.

From asthma, from her parents, and from her boyfriend, Asher, who is smothering her from the inside out. She can take his cruel words, his tender words . . . until the night they go too far.

To escape, Joy sacrifices her suburban life to find the one who offered his help, a homeless boy called Creed. He introduces her to a world of fierce loyalty, to its rules of survival, and to love--a world she won't easily let go.

The cover on this book! I'm a bit conflicted on liking it or not! The font and the way it's placed, it's just so awesome and eye catching. But then the face, and the lights, they just don't really work for me, maybe it's the focus on them, that they're slightly blurry?

What he got her to do? Well, first what he did to her, then what he got her to do to herself, how he threatened to have her dad fired, because his family owned the company that her dad worked for. That's a pretty great reason to leave!

I just enjoyed reading this story! It was really compelling, and the characters were just so great, Joy with the issues that she ran away from, Creed, and the gang of homeless kids that she fell into, they were so great to read about!

Really enjoyed reading this book, it had a perfect ending! So great to read!