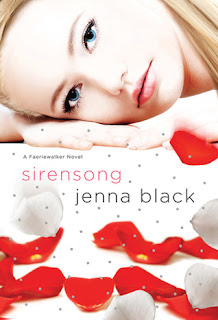 From Goodreads:
When Dana is invited to Faerie to be officially presented at the Seelie Court, it's no easy decision. After all, everyone knows Titania, the Seelie Queen, wants her dead. But Titania claims not to be the one behind the death threats; and her son, Prince Henry, makes the decision a whole lot easier when he suggests Dana might be arrested for (supposedly) conspiring with her aunt Grace to usurp the Seelie throne. So she and her father better do as they're told . . .

The journey through Faerie is long—and treacherous. Dana thought it would be a good idea to have friends along, but her sort-of-boyfriend, Ethan, and her bodyguard's son, Keane, just can't seem to get along, and Kimber's crush on Keane isn't making things any easier. When a violent attack separates Dana from their caravan, the sexy Erlking saves her just in the nick of time . . . and makes it clear that he hasn't given up on making her his own.

Arriving at Titania's beautiful palace should be a relief. But Dana is soon implicated in an assassination attempt against Titania's granddaughter, and is suddenly a fugitive, forced to leave her father behind as she and her friends flee for their lives. Will she be able to prove her innocence before the forces of the Seelie Court—or, worse, the Erlking—catch up with her? And will she save her father before he pays the ultimate price in her stead?

My Review:
This was a pretty fantastic ending to the series! Sure, there's things that I want to know, and I want to spend more time in this world, but yeah, this was a really great book to end the series! I just enjoyed it so much!

Loved the relationships that have been developing, some since the very beginning of the series, and how they ended up! There were a lot of complications, the characters sometimes fought their feelings, but yeah, there were happy endings, like Kimber, and I really loved that!

The mystery of who was behind everything, who was manipulating things, and causing all this trouble for Dana and crew, well, yeah, that was a part of this book that I was really interested in, because it was causing a lot of conflict! Really enjoyed how that wrapped up!

So something that we're missing because we're not going to get another book, is who is going to be the next consul. Which sucks, but oh, well. What happened to the mom, well, yeah, that sucked. But then there were other happy bits!

Really, really fantastic book, I just enjoyed it so much, and I can't wait to read more by Jenna Black!