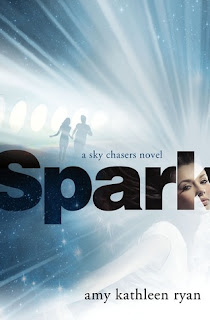 From Goodreads:
Waverly and Kieran are finally reunited on the Empyrean. Kieran has led the boys safely up to this point, and now that the girls are back, their mission seems slightly less impossible: to chase down the New Horizon, and save their parents from the enemy ship. But nothing is truly as it seems…Kieran's leadership methods have raised Seth’s hackles— and Waverly's suspicions. Is this really her fiancé? The handsome, loving boy she was torn from just a short time before? More and more, she finds her thoughts aligned with Seth's. But if Seth is Kieran's Enemy No. 1, what does that make her?

In one night, a strange explosion rocks the Empyrean—shooting them off course and delaying their pursuit of the New Horizon—and Seth is mysteriously released from the brig. Seth is the most obvious suspect for the explosion, and Waverly the most obvious suspect for releasing him. As the tension reaches a boiling point, will Seth be able to find the true culprit before Kieran locks them both away—or worse? Will Waverly follow her heart, even if it puts lives at risk? With the balance of power precarious and the clock ticking, every decision counts… every step brings them closer to a new beginning, or a sudden end...

My Review:
So this book was really fantastic! I enjoyed the first book a lot, like, it was one of my top books of 2011, so I had pretty high expectations (not to the level of what Glow was, but just that this would be a really great book) and this book met them! And more!

This book, Waverly and Kieran are on the same ship for the whole book. And maybe that's not a good thing, seeing as her experiences has made her wary of religion. And Kieran's embraced religion pretty whole heartedly, and there's some conflict there.

There's also conflict around Seth, because she's going more and more to his side, which yeah, is a pretty big source of conflict! But I really enjoyed it, because I can see from both sides, since I've read both. I'm big on compromise. That's what was needed, but wasn't seen. Not quite yet, hopefully in the last book!

The mystery! I mean, we know that Wavery and Seth weren't the ones sabotaging the ship. And when we find out who truly was, well, it made ton of sense! Of course the other ship would leave behind some people!

Such a great book, I enjoyed it a ton, and I can't wait for the 3rd and final book!