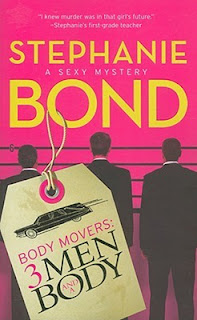 From Goodreads:
Carlotta Wren has always dreamed of taking a vacation from her life as daughter to fugitive parents and mother to her younger brother, Wesley. So when she is temporarily suspended from her job at Neiman Marcus, the invitation from hunky body mover Cooper Craft to ride to Florida for some fun in the sun and a VIP body pickup seems like a good idea....And then Wesley tags along to elude an irate loan shark and to play chaperone....

And then they're greeted on arrival by three different men, each one laying claim to the celebutante's body they've been hired to move....

And it isn't long before they realize someone is determined that the stressed-out trio won't make it back to Atlanta with their famous cargo intact.

My Review:
Another fantastic book in this series! Plus, it's the first time that they leave Atlanta, and that was a change, one that was great to read about! And the fact that 3 different guys want to claim the body, even if it's a celebrity, is a mystery! And I loved that!

This book, it felt like, was Cooper Craft's time to shine. I know he's going to have some darker moments coming up, so it was really great to let him have this time, and being the only romantic interest around for a while, was a great opportunity!

Oh, Wesley. He is/was sleeping with Liz, his lawyer, who also slept with his father. Who is also sleeping with Jack, the detective who slept with Carlotta. Liz, not Carlotta and Wesley's dad. So yeah, there's some complicated relationships there!

I enjoyed the mystery in this book so much, it was really great, wondering why people would want a corpse, and everything that was there! I enjoyed all of that so much! It was a great addiction to this series, yeah!

Yeah, this was a really great book, I enjoyed it a lot, and I need to reread more!