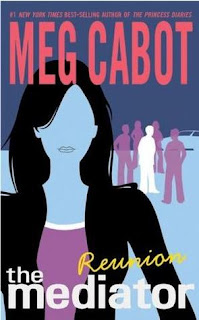 From Goodreads:
The RLS Angels are out for blood, and only Suze can stop them--since she's the only one who can see them. The four ghostly teenagers died in a terrible car accident, for which they blame Suze's classmate Michael...and they'll stop at nothing until he's joined them in the realm of the dead.

As Suze desperately fends off each attempt on Michael's life, she finds she can relate to the Angels' fury. Because their deaths turn out not to have been accidental at all. And their killer is only too willing to strike again.

My Review:
Yeah, reading more of this series that I'm just enjoying so much rereading! And plus, this book has her friend from New York, which was new, and I really enjoyed reading about that! And we learn more about Father Dominic, which was pretty interesting!

This book is one half of the middle, and the end of the more individual plot lines, after this, things are about Jesse, and Paul, and all of that complicated stuff. But this one, is the isolated case of ghosts, and all the adventures there!

I can understand why the RLS Angels want to kill Michael, after all, he deliberately killed them, because they were at/hosted a party where his sister went into a coma. So there's a lot of blame to go around. But that he went so far as to cut the brake lines in her family car? That was horrible!

So the fact that Father Dominic fell in love with a ghost, well, you have to know that it didn't turn out well. Seeing that a) there wasn't a book or series about it, like there is for Suze and Jesse, and b) that he's now a Father, of the faith. Yeah.

This was a really fantastic book, and I just need to reread more!