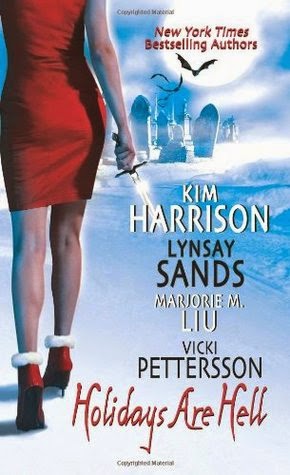 From Goodreads:
This holiday, spend quality time with family and loved ones—living and dead . . .

There's no place like home for the horrordays—unless you'd prefer a romantic midnight walk through a ghost-infested graveyard . . . or a haunted house candlelight dinner with the sexy vampire of your dreams. The (black) magical season is here—and whether it's a solstice séance gone demonically wrong with the incomparable Kim Harrison, a grossly misshapen Christmas with the remarkable Lynsay Sands, a blood-chilling-and-spilling New Year's with the wonderful Marjorie M. Liu, or a super-powered Thanksgiving with the phenomenal Vicki Pettersson, one thing is for certain: in the able hands of these exceptional dark side explorers, the holidays are going to be deliciously hellish!

My Review:
Ah, I really enjoyed this antholgy! It had a Rachel story from pre-Dead Witch Walking, which was awesome, it had a sequel story from The Claire Switch Project in Dates From Hell, a stand alone story that was awesome, and a little different look at the Zodiac series!

Really enjoyed the Rachel story, because it's of how she met Pierce, and we got to see that, and got to really see her with her brother, which we don't really get in the full length books in the series, so yeah, that was great!

Oh, one thing that I really loved, was that the second short story, Run, Run, Rudolf, was a short story sequel to The Claire Switch Project from Dates from Hell! So awesome! I wanted more, and I got more! It was just such a great story, and just as funny as the first one! I can even hope that there might be more in an another Hell anthology! Loved how she changed into a reindeer! So awesome!

Then the Zodiac story! Great to be in the world again, and on a holiday, of course, seeing the theme of the anthology, because holidays are special, and yeah, different etiquettes are held up, and yeah, this story was just so good! And having Zoe, the mom's, POV, that was great!

Yeah, this was a really great, entertaining anthology, and I have to read all of these Hell anthologies!